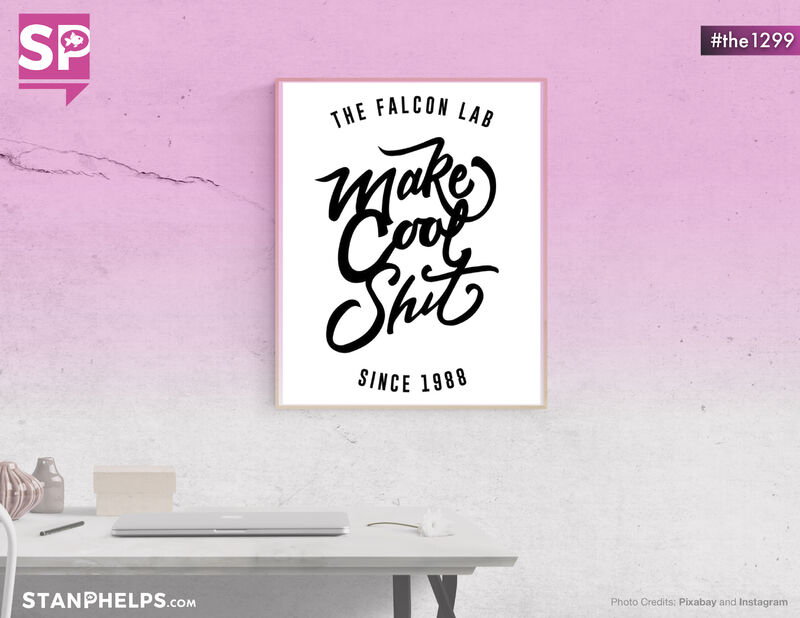 “We make cool shit.” That’s the concise elevator pitch from Borzou Azabdaftari. Borzou is the owner of The Falcon Lab in Tysons Corner in Virginia. The Lab works with companies to communicate their stories and corporate cultures through effective design and print collateral.

David Rendall and I feature Falcon Lab in the upcoming Pink Goldfish 2.0 in a chapter about alignment.

We asked Borzou to share the journey to “Make Cool Shit” in his own words:

“I wish I could tell you the evolution of our marketing was more strategic. It was born from an attempt to be authentic, but also from an inability to describe what we do in a concise elevator pitch…

I guess it started when I realized our core values were bullshit. I learned about core values in the Entrepreneurs’ Organization’s (EO) Accelerator program, and I think I picked some things that sounded nice like “Truth, Justice, and the American way.” Not that, but something like that.

After a few years of holding onto them and trying to make my employees care about things I didn’t care about, we redid them.

The first one, which eventually became our tagline and really secondary logo – was “Make Cool Shit.” Why? Not just that we make things that are cool – but we endeavor to make everything cool. If it was cool last time, how could it be better next time?

Core values are typically for staff, not all companies have them outward-facing. We really liked “Make Cool Shit” though. We couldn’t help ourselves. First, we made them as koozies for a tailgate event we sponsored. This was mostly a younger crowd, and we figured it would be fine there, so we weren’t really surprised people liked it. Then, we made T-shirts, but again just for the staff. It was still our thing, for the inner circle. Even customers we let in on it were told to keep it quiet. We really just didn’t know how people would react.

Little by little it leaked out though. More and more people wanted a shirt, or a koozie. People started saying they were coming here to make cool shit. It meant something to our customers. Without explanation or effort, it meant the same thing it did to them that it did to us. It was really special.”