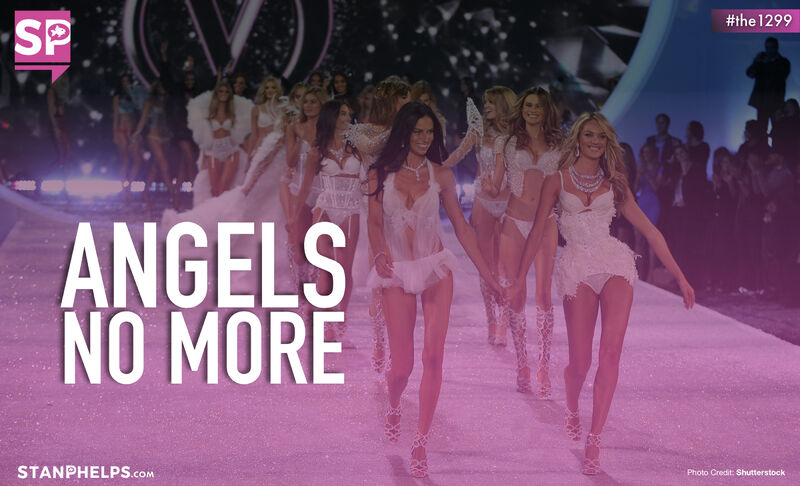 Victoria’s Secret is undergoing a major rebrand. A major change is the abandoning of the ANGELS. Not familiar with the Angels? The Angels were a group of notably thin models who would strut in heavy wings and sky-high stilettos. These runway extravaganzas were televised fashion shows.

A bit of background. Victoria’s Secret launched in 1977 by the husband and wife team of Roy and Gaye Redmond. The launch was inspired by discomfort.

Roy was embarrassed when purchasing lingerie for his wife at a department store. According to reporting by Newsweek, Roy shared, “When I tried to buy lingerie for my wife, I was faced with racks of terry-cloth robes and ugly floral-print nylon nightgowns, and I always had the feeling the department store saleswomen thought I was an unwelcome intruder.”

Roy spent the next eight years studying the lingerie market before opening the first store in Palo Alto. Victoria was a nod to Queen Victoria and the Victorian era in the 19th century. This conservative era was defined by a strong drive for higher moral standards. Hence, the “secret” was what was worn under those prim and proper clothes.

By 1982, the Raymonds had five stores and a booming mail-order business. Victoria Secret went all-in and lopsided the catalog. The 12th catalog debuted at 40-pages and a cost to customers of $3 (that’s equivalent to over $8 today). Catalog sales accounted for 55% of sales and caught the eye of Leslie Wexner. The founder of The Limited acquired the brand in 1982.

Within four years, the brand would boast 100 locations as the only national chain devoted solely to lingerie. The growth would continue through 2016 making Victoria’s Secret the largest lingerie retailer in the US with more than 30% market share. The last 5 years haven’t been so kind.

In P!NK GOLDF!SH 2.0 (launching July 6th), David Rendall and I share how model Ashley Graham antagonized the brand. One of her recent projects is for the plus-sized fashion brand Lane Bryant. The campaign is called #ImNoAngel. A not-so-subtle shot at Victoria’s Secret.

It’s an opposing move for Victoria’s Secret. For a brand that sold supermodel sexy and a selective illusion of beauty, this is a drastic shift towards inclusion.

CEO Martin Waters shared in a press release, “We are on an incredible journey to become the world’s leading advocate for women.”

Question – is this a smart strategic move?