The Great Resignation: The Top 10 reasons why employees are quitting at record levels 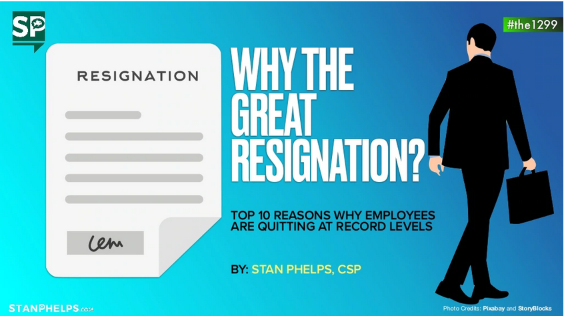 Why “The Great Resignation?” The Top 10 reasons why employees are quitting at record levels.

Nearly 3% of the workforce quit their jobs in October. That’s over 4 million resignation letters. And it is just shy of the record set the month before.

Last month I speculated on the top 5 reasons on LinkedIn. That post received nearly 200 comments. Many suggested additional reasons. So, here are the top 10 contributing reasons and 3 factors that I believe are negligible…

1. Horrible Bosses – 70% of workers who voluntarily resign don’t quit their job… they quit their boss.

Here was a comment from the CEO of SHRMJohnny C. Taylor, Jr.,

2. Lack of freedom – Many workers have been remote over the last two years. They’ve gotten used to work-from-home. Namely less stress and greater flexibility. Now many are being mandated to go back to the office.

3. Friends – According to Gallup, “Those who [have a best friend at work] are seven times as likely to be engaged in their jobs.” The pandemic has weakened work relationships.

4. Peer Pressure – You can’t discount the “knock-on” effect of job-hopping. All of a sudden you start seeing coworkers or friends quitting in droves. You begin to question it yourself.

5. Generational – Millennials and GenZ are now the vast majority of workers. They don’t see work the same way as previous generations. Job hopping isn’t a black mark any longer.

6. Mo’ Money – In the words of Ray DuBeau Jr., “Money is the conduit that allows people to live their lives. Companies and industries that are offering above-market rates aren’t experiencing the great resignation.”

7. Start-Up Boom – Americans started 4.3 million businesses last year, a 24% increase from the year before and by far the most in the 15 years that the government has kept track. Applications are on a pace to be even higher this year.

8. Childcare – lack of it has forced workers, particularly women, from reentering the workforce.

9. Upskilling – According to Lon Graham, “During the pandemic, a lot of people enrolled in online classes, online training, and other skill-building activities. The one’s who did are now worth more to the marketplace and are leaving current jobs for the jobs they qualified themselves to get.”

10. Purpose – According to Margarita Andryushenko, “If an employee doesn’t feel like they’re making a difference or if the work they are doing actually matters, that’s a big deal-breaker right there. People want to feel connected and important to the work they’re doing.”

… and 3 reasons that aren’t valid in my view: Vaccine Mandates, Handouts, and Gig Work.

What other factors are contributing?