“not sure who needed to hear this today, but it’s ok not to be happy all the time. all that matter is that you #FeelYourWay” -Burger King 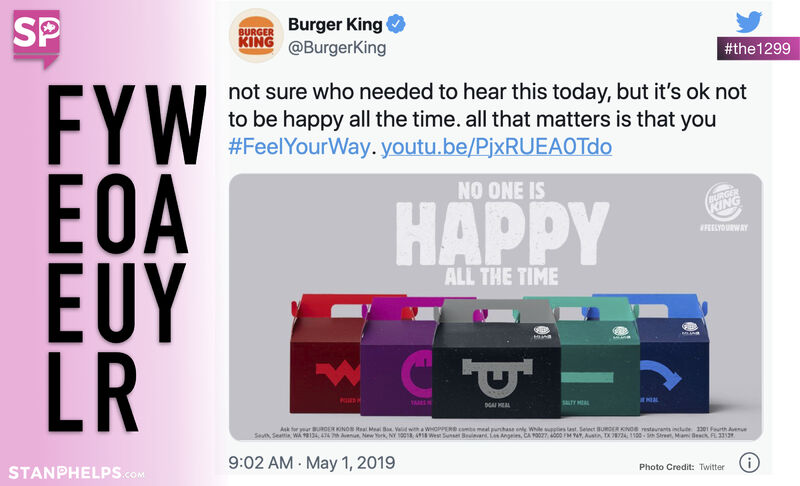 “not sure who needed to hear this today, but it’s ok not to be happy all the time. all that matter is that you #FeelYourWay“

This was a tweet from Burger King back in 2019. It introduced a range of boxed deals called “Real Meals.” This swipe at the McDonald’s Happy Meal included five varieties:

This limited-time “Real Meal” offer was tied into Mental Health Awareness Month. Each of the Real Meals included a Whopper, fries, and a drink.

David Rendall and I featured this case study in Pink Goldfish 2.0 as an example of (dis)owning your flaws.

In a joint announcement, Mental Health America CEO Paul Gionfriddo shared, “Burger King is bringing much-needed awareness to this important and critical discussion – and letting its customers know that is OK to not be OK.”

The launch featured a print advertisement showing a montage of people in various emotional states, using the line: “No one is happy all the time. And that’s OK.”

Not everyone was thrilled with the campaign. For example, the co-founder of “The Daily Wire” Ben Shapiro commented, “This is a hell of an ad for depression eating.”

With a widespread backlash in the traditional press and on social media, Burger King caved and eliminated the Real Meals.

David and I think that, if there is a criticism of the program, it’s the limited way Burger King executed it. They should have ramped up the meals, instead of cutting them. The Real Meals were only available in five markets. They could be purchased in Seattle, New York City, Los Angeles, Austin, and Miami Beach, but only at specific stores.

We would have loved to see them make this a permanent offering. McDonald’s’s offers Happy Meals, Burger King could have given us permission to be unhappy, at every restaurant, every day.

This message is hitting close to home today. Nearby at the University of North Carolina at Chapel Hill classes are canceled last week. This is in response to a suicide and an attempted suicide.

“As chancellor, a professor and a parent, my heart breaks for all those whose suffering goes unnoticed. I encourage every student to use this time [Wellness Day] to rest and to check in with each other …. Reach out to a friend, a classmate, or colleague and ask them, ‘honestly, how are you doing?”

My message to Burger King. You should have eaten your own food and DGAF about the critics. Bring back the Real Meals. Because it’s still OK not to feel OK all the time.