McDonald’s announces that it will stop doing business in Russia 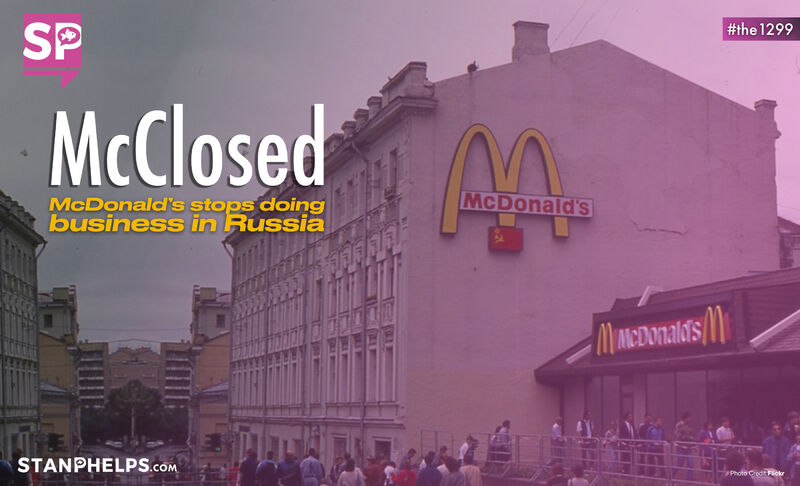 McClosed. McDonald’s announces that it will stop doing business in Russia. Yesterday, the Golden Arches was joined by one of its biggest partners, The Coca-Cola Company, in ceasing its operations after the invasion of Ukraine.

It’s not a small gesture by McDonald’s. The chain has 850 stores in Russia. Nearly 85% of those are company-owned. It has also temporarily closed its restaurants in Ukraine. Those two countries account for nearly 10% of global revenues at the Golden Arches.

The move is also hugely symbolic. The Iron Curtain was lifted back in 1989. I was studying overseas at the time. I vividly remember seeing the amazing images of the Berlin Wall coming down that November.

In 2002, I made my first trip to Moscow for work. While visiting, I made a special field trip to have dinner at the McD’s in Pushkin Square. I can remember taking the subway and navigating my way to the restaurant. It would begin my quirky move to eat at McDonald’s when visiting a new country.

You can stand out in business in two ways. One way is by doing more of something. Here we see a demonstration of the other approach. Doing less and withholding from the norm. McDonald’s CEO Chris Kempczinski stated the reason behind the move, “Our values mean we cannot ignore the needless human suffering unfolding in Ukraine.”

In a classy move, McDonald’s will continue paying its 62,000 employees in Russia. Kempczinski shared they will continue to support those, “who have poured their heart and soul into our McDonald’s brand.”

Postscript: In 2013 and 2014, I made a series of three trips to Russia for speaking engagements with the telecom Beeline Business. One was to the Russian city of Rostov on Don. It is located near the border with Ukraine. I was in the city shortly after fighting broke between Ukraine and Russian Separatists. The event organizer advised that I shouldn’t leave the hotel. I remember the tension and I was over 30 miles from the shelling and fighting. My heart goes out to the Ukrainians who have now experienced this for the last fortnight. Stay strong.