It turns out that Kit Kats are made of Kit Kats. What? 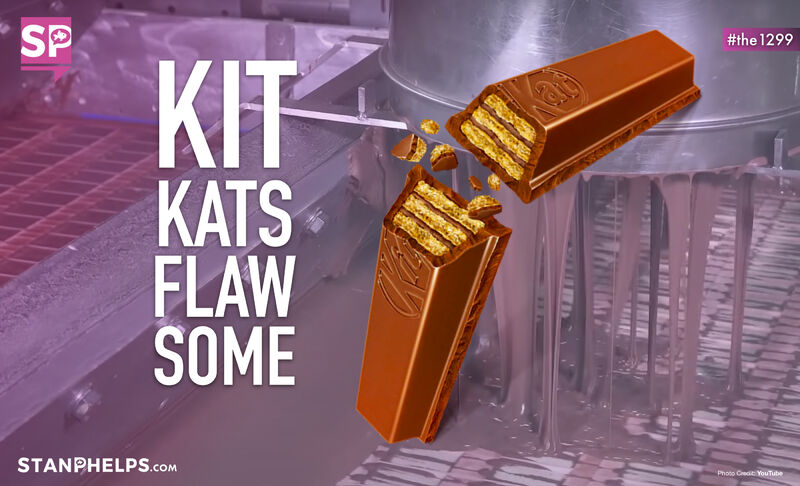 Kit Kats are flawsome. There is no such thing as a perfect Kit Kat. It turns out that Kit Kats are made of Kit Kats. What?

Nestlé (Global) and The Hershey Company (US) take the imperfect Kit Kats and mash them into a paste. That paste is used to fill in between the three wafers.

To parrot the words of George W. Bush, “No Kit Kat Left Behind.”

EMBARRASSING ADMISSION
I can remember sitting at the kitchen table with my Mom and older sister at age 8. I shared with them that I thought swiss cheese was a rip-off. In my view, the company was punching out the holes. And then they were putting the holes back into the pot to make more cheese. Needless to say, my family would never let me live that theory down. Turns out I would’ve been right if I was talking about Kit Kats.

What’s your favorite candy bar? Kit Kats have overtaken Snickers as my favorite. Here’s my go-to tip for enjoying both. Elsa-style…. FROZEN.

If Snickers got its name from the favorite horse of the Mars family, where did the name Kit Kat come from?

The use of the name Kit Kat goes back to the 18th century when mutton pies known as a Kit Kat were served at meetings of the political Kit-Cat Club in London. The club was owned by pastry chef Christopher Cat.

Confectioner Rowntree trademarked the name 111 years ago. It would take another 24 years before the company would launch the traditional four-fingered bar we recognize today.

What prompted the creation? A worker at the factory in York put a suggestion in a recommendation box. He advocated for a snack that “a man could take to work in his pack.”

Here are a few interesting progressions for the brand:
– The packaging was initially blue. It became red after WWII.
– The iconic slogan, “Have a Break, Have a Kit Kat” was coined by Donald Gilles, an ad man at J. Walter Thompson London in 1957.
– The “Gimme a break” jingle created in 1986 is a top-ten earworm according to University of Cincinnati researcher James Kellaris.