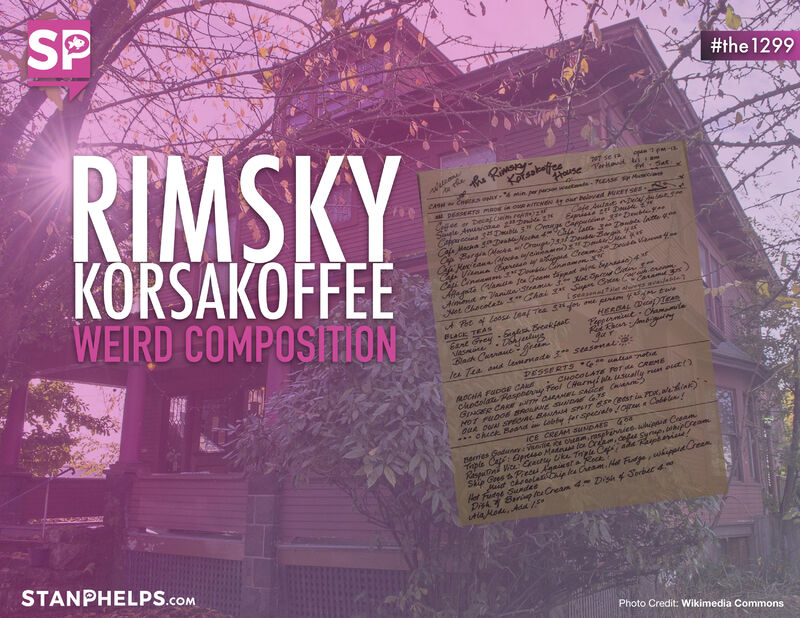 “Casually threatening atmosphere with dessert and coffee to die for.” That’s a description for Rimsky-Korsakoffee House, a legendary coffeehouse in Portland, OR.

Last month I wrote about Kraft’s Pink Candy Flavored Mac & Cheese. In the comments, I mentioned another PDX landmark named Le Bistro Montage and their different types of Mac & Cheese. I was disheartened to hear that the restaurant succumbed to COVID. It had me thinking about Rimsky’s and their fate.

I’m going to assume you’ve never been to the coffeehouse. Let me paint the picture of this Pink Goldfish. Rimsky-Korsakoffee House was founded by Goody Cable in 1980 in the Buckman neighborhood. Named after a Russian composer, the classical music-themed coffeehouse operates from the former living room of an allegedly haunted 1902 Craftsman-style house.

Good luck finding it. There’s no sign out front. And you better bring some cash. Rimsky doesn’t accept credit cards. Beyond tasty desserts and strong coffee, I fell in love with some of the micro-weirding at the coffeehouse. Here’s one of my two fav’s:

HAUNTED TABLES – three of the tables have tricks built into them. They all move imperceptibly. One goes up and down, one next to a wall slides in and out, and a big roundtable rotates. The “possessed” tables are cool. Each of the tables is named after a composer. The Sergei Rachmaninoff table shakes when a button in the kitchen is pressed.

The second micro-weird element of Rimsky’s is their upstairs bathroom. The unisex bathroom has an “under-the-sea” theme and according to Wikipedia, “regularly induces screams.” I can vividly picture the toilet paper holder. A mermaid painted on the wall with outstretched hand fixtures that held the TP.

Back to their fate. Did they survive the pandemic? According to reporting by Willamette Week,

“The business has survived several waves of economic upheaval virtually unchanged. But as with pretty much everywhere else, COVID-19 is presenting Rimsky’s with an existential threat it’s never before faced. For that reason, several loyal patrons and staff—with a nod from the owners—have launched a crowdfunding campaign to help keep the lights on and the tables spinning.”

The GoFundMe campaign had a goal to raise $5,000 to assist with operating costs. They didn’t raise $5K, the effort netted over $20,000. hashtag#FTW