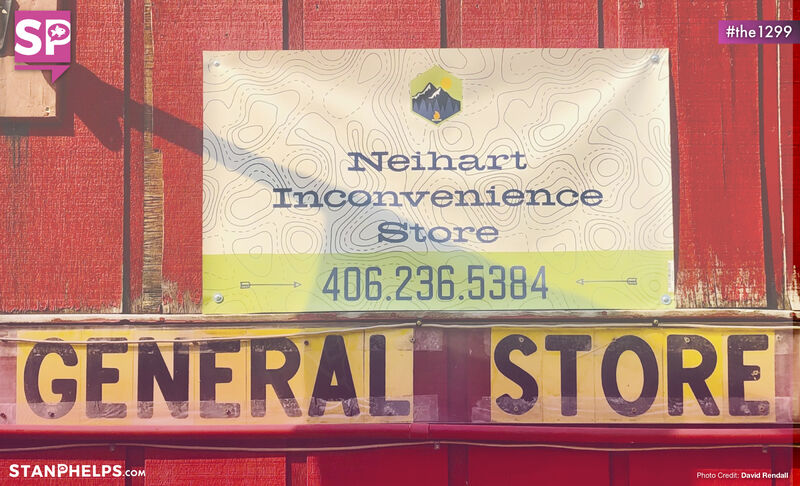 A bit of background: We were in route to Utah and needed to stop for a podcast with Phil Gerbyshak. The choice was a) stay at the hotel for an extra 90 minutes or b) ride the odds with WIFI from the road. We embraced a potential flaw and chose the latter.

As we left Great Falls, our decision seemed doomed. Driving south, the cell service was minimal. Our backup plan of using a hotpot was immediately foiled. Even worse, we had no way to tell Phil that we might be standing him up.

The plan was to head through Yellowstone later in the day. Route #89 is the main route and the towns are few and far between. The only hope was to find a rest stop or store with WIFI. The clock was ticking. About 10 minutes before our podcast interview, a small dot appeared on our GPS.

It was Neihart, Montana.

5 minutes later we walked into the Neihart Inconvenience Store. The Pink Goldfish 2.0 Book Launch Tour Gods had smiled upon us. How do we know for sure? A printed sign on the entrance said FREE WIFI inside.

The clerk was super-friendly. She shared the password and we were immediately in business. [It’s beerhunter, all lower case in case you need it]

The podcast went off without a hitch from a kitchen table in the General Store.

So what’s the deal behind the Inconvenience Store?

The clerk shared that the store was originally started as a co-op in the small town. A bunch of neighbors got together to create a buying group. They call it the Inconvenience Store because it was rarely ever open. It had been sold to the current owners who keep it running 7 days a week. They decided to keep the name as they reasoned that maybe you leave home and need something. Or you stop by for something and they don’t have it. Both are inconveniences.