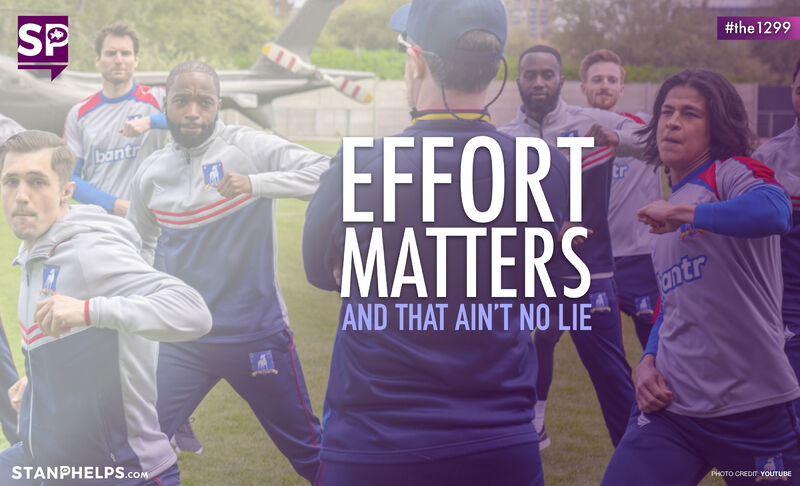 Didn’t see the episode? Let me set the scene from Season 2, Episode 11:

The coaching staff is watching the players on the pitch.

Ted: They can’t maintain their lines. [Ted sighs] These guys are just not in sync.

Ted: No. No, no. Guys, come on. That ain’t gonna cut it. Y’all gotta be together on this, all right? [The scene reveals that Ted is trying to teach the team a 90s dance routine]

It’s like this. [He demonstrates his best N’Sync form] “You may hate me, but it ain’t no lie.” Yeah? Then the hands. “Bye, bye, bye.” All right? And watch my jumps. “Ain’t no lie.” See how I’m jumping? Like I’m a marionette. That’s why this song is on the album “No Strings Attached,” all right?

[The team murmurs in agreement]

Ted: Yes. Okay, good. Now, look, fellas, performing this at Doc’s going-away party ain’t gonna mean Bo Jackson diddly squat unless she can tell how hard we worked on it. You know what I mean? It ain’t the execution. That ain’t the gift. It’s the effort. Yeah? Okay? You see what I mean?

Coach Lasso has just revealed the essence of lagniappe and Purple Goldfish Strategy. It’s not just execution. It is differentiation by added value and effort. Little things that show that you care. Either by adding value or reducing effort for customers.

To quote Rory Sutherland, “The meaning and significance we attach to something is felt in direct proportion to the expense with which it is communicated.”

Sutherland calls this signaling in the book “Alchemy.” The effort is a signal to the customer that the company cares.