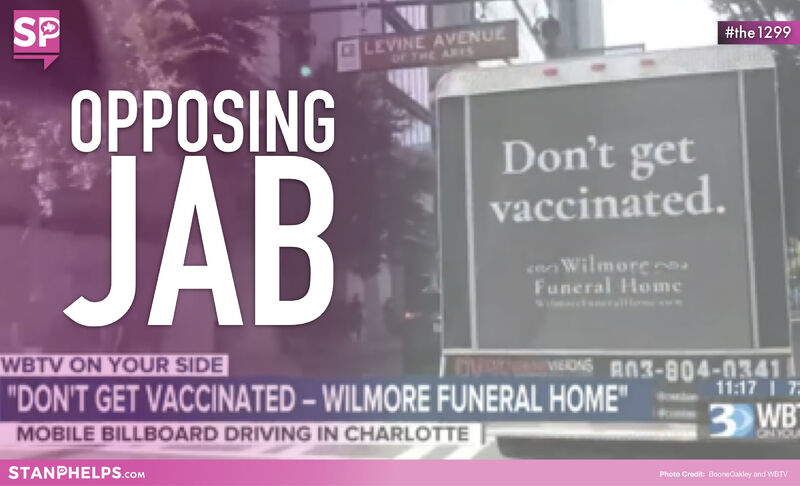 “Don’t Get Vaccinated.” That’s the message from the Wilmore Funeral Home in Charlotte.

Actually, it’s a message from BooneOakley. The North Carolina advertising firm put together the campaign. The advertising truck commissioned by the agency circled Bank of America Stadium on Sunday.

But here’s the deal. There is no Wilmore Funeral Home.

If you go to wilmorefuneralhome.com, it’s a simple page that says, “Get vaccinated now. If not, see you soon.”

There is only one link. It brings you to StarMed Healthcare. The site features information about the three vaccines. It encourages visitors, “You have a spot. Take your shot.”

The faux campaign has gone viral. According to The Washington Post,

“It turned out to be an elaborate and unorthodox campaign to promote the coronavirus vaccines — one that drew applause from local hospital leaders and social media users as it went viral on Twitter, while leaving some experts in vaccine marketing questioning whether any holdouts would be swayed by the stark message.”

The approach by BooneOakley is a great example of the Pink Goldfish strategy of Opposing. In Pink Goldfish 2.0, David Rendall and I share how opposing is doing the exact opposite of what others are doing. It’s being unlike the competition. It’s doing things that conflict with traditional methods.

“Everything that’s being done right now is pretty straightforward — ‘get the shot,’ ‘get vaccinated today,’ ” David Oakley shared in an interview with WBTV. “It was a different way of going about the message.”

Instead of more of the same, the agency went in the opposite direction and it go attention.

It’s worth taking a look at the definition of opposite. It means, “contrary or radically different in some respect common to both, as in nature, qualities, direction, result, or significance.”

Let’s face it. Nothing seems to be working in North Carolina. My adopted home state is lagging behind the national average. Less than half of eligible recipients have been fully vaccinated.

The numbers are troubling. According to NC DHHS, there are currently 3,464 people hospitalized statewide and over 15,000 people have died from COVID-19 since the pandemic began.

Your take, is this different approach going to be effective?