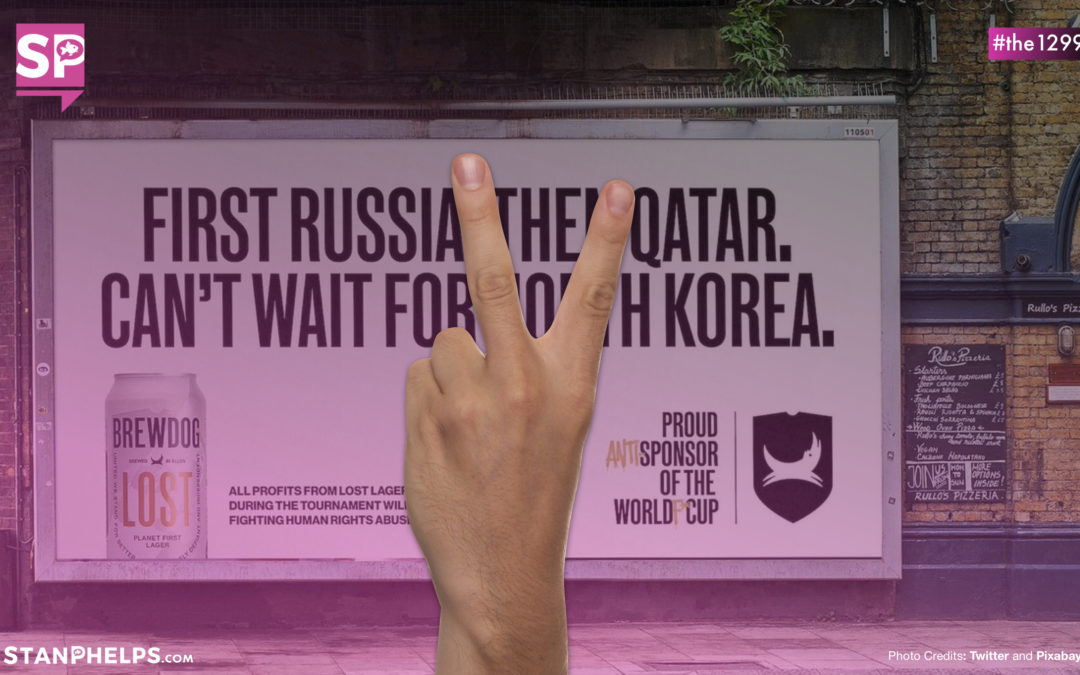 Do you know the difference between two thumbs up and two fingers up?

The two fingers up (palm inward) have a very different meaning than peace or victory in the UK, Australia, or New Zealand. Just ask George H.W. Bush.

While visiting Canberra in 2008, W gave the V-for-victory sign as he drove in his armored limo past some demonstrators in Australia’s capital.

A friendly gesture? Nope. Holding up two fingers has the same meaning as a middle-finger gesture in America. You could say it makes the lone middle finger “one louder.” An up-and-down motion while making the gesture is often used for emphasis.

The Scottish brewery BrewDog is currently giving the two-fingers-up salute to Qatar hosting the World Cup. It is ANTAGONIZING FIFA and labeling itself as a proud anti-sponsor. Calling the event the “World F*Cup.”

Why? BrewDog is critical of human rights practices in Qatar including… the criminalization of homosexuality, the use of flogging as punishment, and the reported deaths of over 6,000 migrant workers working on World Cup infrastructure projects.

They’ve created a beer called “LOST” in honor of the anti-sponsorship. BrewDog will be donating all the profits from LOST during the World Cup tournament to human rights charities.

Hat tip to my coauthor David Rendall for sharing the story. BrewDog isn’t your ordinary craft brewer. This microbrewer is a notorious Pink Goldfish.

Here are a handful of other FLAWSOME things that make them eminently talkable:

2. Shower beers – In 2018, BrewDog launched DogHouse Hotels. The first craft beer hotel. Of course, they are dog-friendly. But my favorite is the minibar next to the shower. Why?… because beer tastes better in the shower. [MICRO-WEIRDING]

4. Beer Advent Calendar – the brewery has offered the best of BrewDog in one box. A craft beer advent calendar allowed you to unwrap 24 bottles including 14 new beers for 2021, 6 new holiday beers, and 4 online exclusives. [MICRO-WEIRDING]

5. Road-kill beer – interested in trying a 55% ABV beer. It takes over seven months to brew. It’s super-limited and expensive. The thing that makes it really weird is that the bottle is encased in a squirrel. Why taxidermy squirrels? According to BrewDog,

“We wanted to do something that was at the same time beautiful and disturbing, something that made a statement and tried to make people stop and think about all of the possibilities that beer actually has.” [LOPSIDING]

Your thoughts on the World F*Cup campaign? Thumbs up or down?