All you need to know about business, you can learn from the movie, “The Godfather” 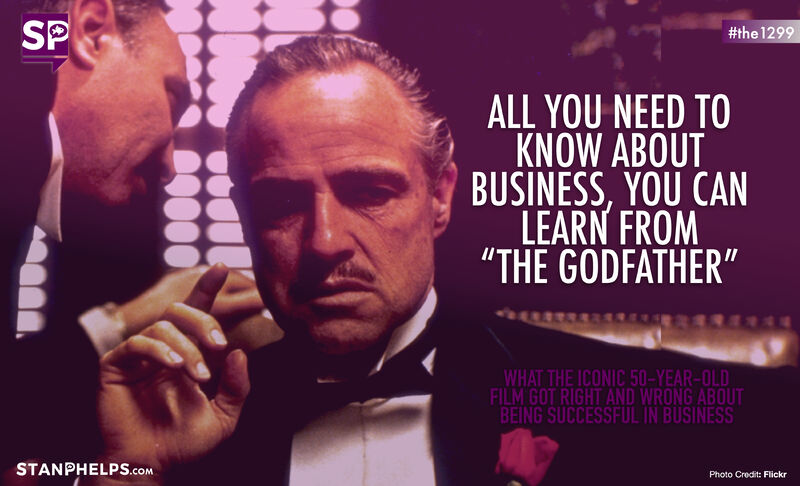 All you need to know about business, you can learn from the movie, “The Godfather.” Here are two things the iconic 50-year-old film got right and wrong about business.

For background, next week the original in the trilogy turns 50. The adaptation of the Mario Puzo novel, directed by Francis Ford Coppola, debuted in theaters on March 15, 1972.

If you’ve lived under a rock and haven’t seen one of the greatest movies of all time, let me give you a primer:

The original movie chronicles the late life of Sicilian immigrant Vito Corleone (played by Marlon Brando) and his family. The Corleone’s are one of five major mafia families in New York City during the 1940s. The arc of the movie follows the ascension of Michael Corleone (played by Al Pacino) to replace Vito and become the new head of the Corleone family.

[If you haven’t seen the original, know that “Godfather II” is the best sequel ever made. It’s soo good, it is the only time two actors (Brando and DeNiro) have ever won an Oscar for playing the same character in separate movies]

Back to the two business lessons:

What did “The Godfather” get right? The movie begins at the wedding of Connie (Vito’s daughter) on the Corleone estate. Various scenes show Vito extending favors to business colleagues and members of the community. You realize Vito’s power as the head of the family comes from his ability to give. He gains status by giving without any explicit agreement for immediate or future rewards.

Purple Goldfish Lesson: Don’t think just about the transactional nature of business. Go beyond. Do the “little things” to leverage the power of the gift to build status and relationship capital.

What did “The Godfather” get wrong?

There is a powerful pivotal scene where Michael, Sonny, and Tom talk about how to avenge the attempt on the life of Vito Corleone. The takeaway is that you shouldn’t take business personally. It’s just business.

This is a lesson that falls short in business in my view. Business is always personal.

Diamond Goldfish Lesson – Business is not just about money. The game of business is for “identity.” Think about the most successful people you know who create, establish, grow, and manage their identity over time. Those are the ones who create strong relationships and win more often in business. They manage themselves under pressure and help build the identity of others. It’s never just business, it’s always personal.

What’s your favorite lesson from “The Godfather?”