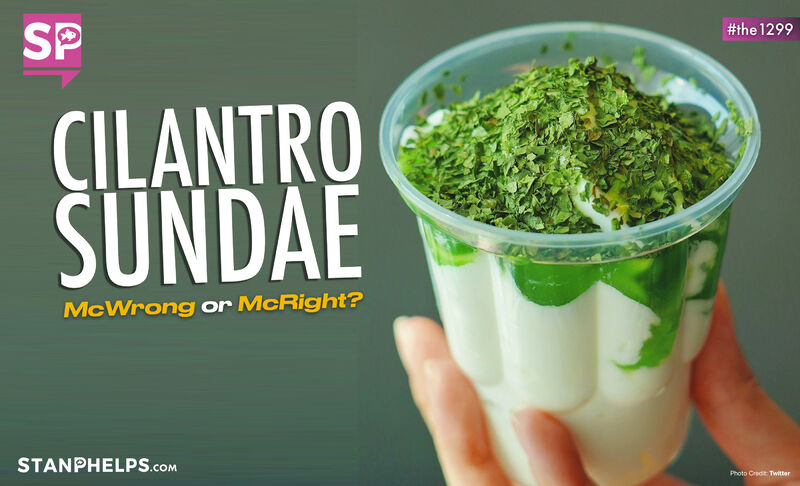 Move over Shamrock Shake, would you try a Cilantro Sundae?

Last week McDonald’s China had the Cilantro Sundae on offer. The limited-edition dessert came with vanilla ice cream and neon green cilantro sauce. It is topped with cilantro flakes.

Would you try this?

For upwards of 20% of the US population, this herb is revolting. The dislike has to do with genetics. If you have OR6A2, an olfactory receptor, it picks up the scent of aldehyde chemicals. Aldehyde chemicals are in both cilantro and soap. Hence, you will think it tastes like soap.

@AdamKoffler commented on Twitter, “Might as well just eat a bar of soap.” I’m guessing that Adam might be one of 280,000 who are part of the “I Hate Coriander” Facebook page. Last week the page decried February 24th as International “I Hate Coriander” Day.

The timing of this antagonizing sundae is no coincidence.

Not everybody is in the hate camp though. @SuperSpacedad was on Team Cilantro, “Anyone who hasn’t tried it should – spicy + sweet/creamy does amazing things on your tastebuds.”

Big thanks to Keith Green, APR who shared a tweet from J.W. Cannon that included J.W.’s take, “I’m both intrigued and horrified at the same time.”

Part of the reason Keith shared this with me was based on my practice of visiting a McDonald’s in every country I visit. I’ve now visited McD’s in over 30 countries. I’m also intrigued by the regionalized versions of its menu. And sometimes that menu can be different in the same country. For example, did you know Spam is on the menu in Hawaii?

Speaking of the portmanteau of spiced ham from Hormel Foods, how about this Frankenburger that McDonald’s China launched for one-day last December? The Spam-Oreo Burger included two slices of Spam, topped with Oreo crumbs, and the chain’s signature burger sauce.

Stay tuned. The Cilantro Sundae is part of the year-long members-only “creative” menu in China. Last month was the Spicy Chili Oil Sundae.

Where are you on the Cilantro Sundae debate? McWrong or McRight?