“Why would anyone pick blue over pink? Pink is obviously a better color.” -Kanye West 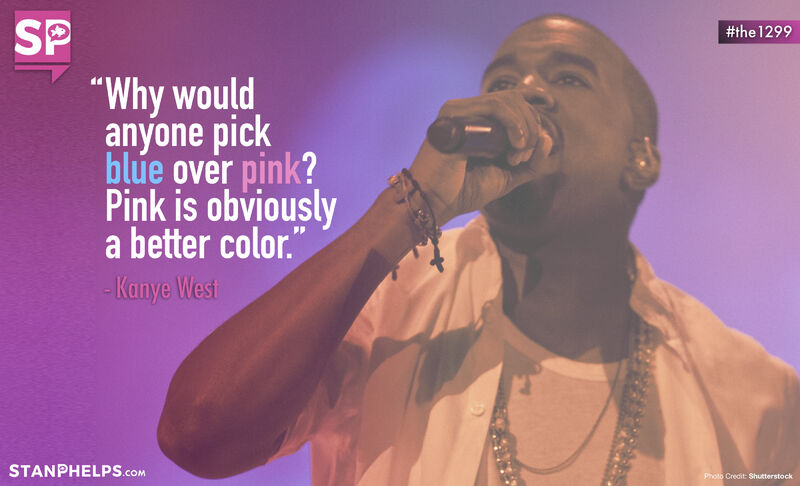 Is Kanye correct? “Why would anyone pick blue over pink? Pink is obviously a better color.”

Are you on Team Kanye?

There are even those who go so far as to argue that pink isn’t even a real color.

Robert Krulwich, a co-host of Radiolab noted that pink doesn’t occupy a slot in the familiar colors of the rainbow. There is a gap between Red and Violet. Your brain fills it in with the color pink. That’s why he believes that pink doesn’t really exist.

Barbara Nemitz, author of “Pink: The Exposed Color in Contemporary Culture,” suggests that “many people have little regard for pink.”

Valerie Steele agrees. In “Pink: The History of a Punk, Pretty, Powerful Color,” she argues that “pink provokes exceptionally strong feelings of both attraction and repulsion.” It is a color that is both “glorified and denigrated.” Steele describes pink as the “most divisive” and the “most controversial” color.

Pink is a perfect metaphor for a brand. You want to evoke strong feelings in a world filled with “Meh.”

Two weeks ago I met Nick Pellegrino in Nashville. The owner of the restaurant “Mangia” shared some advice he received early in his career from a mentor, “Nick, you gotta remember nobody gives a f*ck.”

You’ve got to be divisive in order to stand out. If are in the “middle of the road,” get ready to get run over.

People hate pink and they love it. They think it’s the worst and the best, awful and amazing, ugly and beautiful, weak and strong, imperfect and perfect.

Takeaway: Pink is the way it is and it makes no attempts to disguise itself. Maybe that’s why Kanye loves it. Is your brand like the color pink?

tan Phelps walks the walk. He stands out in the sea of sameness by modeling his own Differentiated Experience (DX) message: Differentiation isn’t just about what you say, it’s about what you do and, more importantly, how and why you do it. Stan leverages his unique collection of 5,000+ case studies on customer, employee, and brand experience to engage audiences with informative learning-based experiences. He believes purposeful DX wins the hearts of employees and customers, and differentiation ultimately boosts loyalty, retention, referrals, and results.