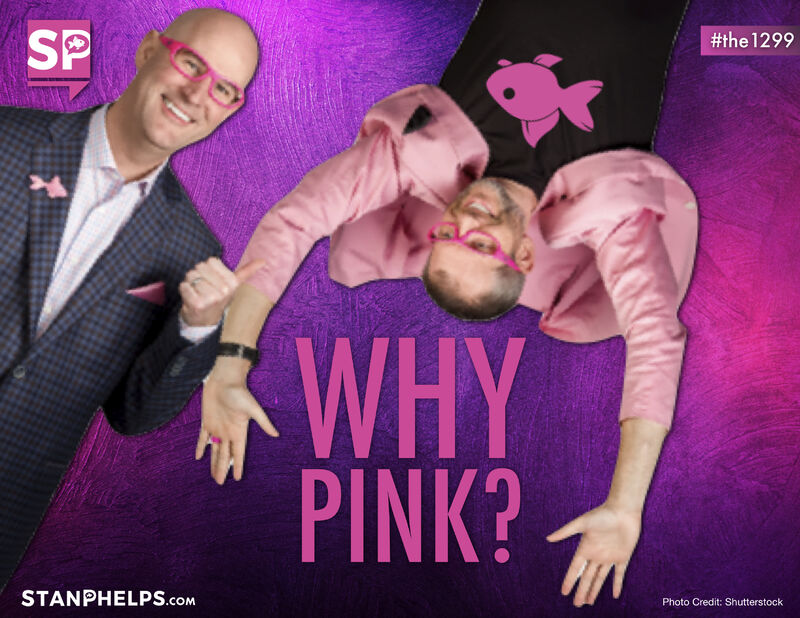 Why Pink in Pink Goldfish? David Rendall is the inspiration. He is the ultimate advocate for embracing weirdness and exploiting imperfection.

David wears head-to-toe pink on stage. This includes pink pants, shoes, socks, belt, and watch. His shirts display his trademark pink Tyrannosaurus Rex. He even has a custom-made three-piece pink pinstripe suit, which he wears with a pink shirt, pink tie, and pink Chuck Taylor shoes.

When asked about all the pink, David credits his family. He and his wife Stephanie have three daughters. During his speeches, he tells stories about how living in a house full of women was gradually turning him into a woman. From pushing him to use an exfoliating body wash to painting his toenails to telling him to trim his eyebrows, David believes they were on a mission to make him more like them. Instead of pushing back, he has chosen to embrace his feminine side and the color that represents it—pink.

His unconventional commitment to pink makes him memorable to audiences. David leaned in and pink has become inextricably linked to his brand. It’s everywhere, even off-stage. Because he competes in Ironman triathlons, he had his bike custom-painted pink.

David didn’t always wear pink. He didn’t always want to stick out. He didn’t want to be weird. He wanted to be normal and professional. He wanted to be accepted. He wanted to fit in. He wore normal pants, normal shirts, normal shoes, and normal ties. He wanted to meet other people’s conception of what a successful person wore. He wanted people to take him seriously. It’s hard sometimes to go against the grain of what everybody else does because we wonder if people are going to like it. That is why David Rendall and I wrote Pink Goldfish (and the forthcoming Pink 2.0). We want to show you the power of pink, the power of being different, the power of defying expectations, and the power of being weird. Pink is the main differentiator for him. It makes him remarkable. David powers his business on referrals. He gets audience members to say, “You’ve got to hear this guy. He’s funny and he wears pink pants and he talks about dyslexic billionaires and freakish arm wrestlers from Germany.” Check out his TEDxZurich talk here: “How Our Weaknesses Can Become Our Strengths” https://youtu.be/M6klc_nSWrQ