What John Williams can teach us about speaking 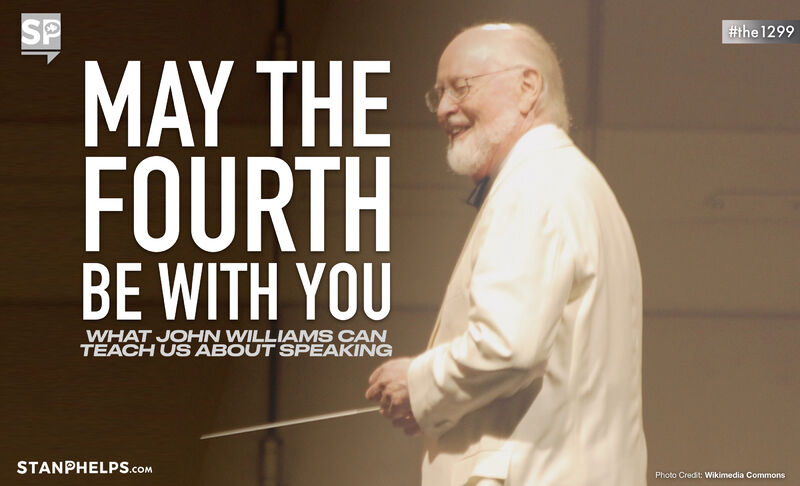 May the Fourth Be With You. Today we celebrate all things “Star Wars.” And it’s impossible to think of the entire saga without hearing the theme music from legendary composer John Williams.

The Star Wars theme is among the most widely recognized in film history. It is also the highest-grossing non-popular music recording of all time. It won John Williams the Academy Award for “Best Original Score.”

TRIVIA – speaking of the Academy Awards, there is only one person who has been nominated for an Academy Award more than Willams’ 52 times. As a film producer, Walt Disney holds the record for most Academy Awards earned by an individual, having won 22 Oscars from 59 nominations. Next year John Williams will compose his final score to the fifth installment of the “Raiders of the Lost Ark” series.

What makes John Williams an amazing composer? After all, his scores are associated with 9 of the Top 25 Grossing films of all time. His secret sauce is something we can all leverage when presenting.

Williams has mastered a technique called “leitmotif.” The word leitmotif is an anglicization of the German word Leitmotiv  meaning guiding motif.

John White in the “Analysis of Music” describes it as a succession of notes that has some special importance in or is characteristic of a composition: “the smallest structural unit possessing thematic identity.”

In presenting, we call this concept of leitmotif the “Central Idea.” Your entire presentation should be built around just one thing. It’s a few words or one sentence.

When composing, John Williams could do it in as little as two notes. You can read the following word with hearing two notes of E and F…. Jaws.

I was just chatting about this yesterday to fellow speaker and “Pink Goldfish 2.0” co-author David Rendall. Dave is amazing at simplifying things down when he coaches presenters. He shared with me his mantra, “Persuasive presenters tell powerful stories built around a central idea.”

Here’s the takeaway: Your presentation should be as short as needed to accomplish your objectives and share your “leitmotif” of a central idea.