What can marketers learn from Banksy 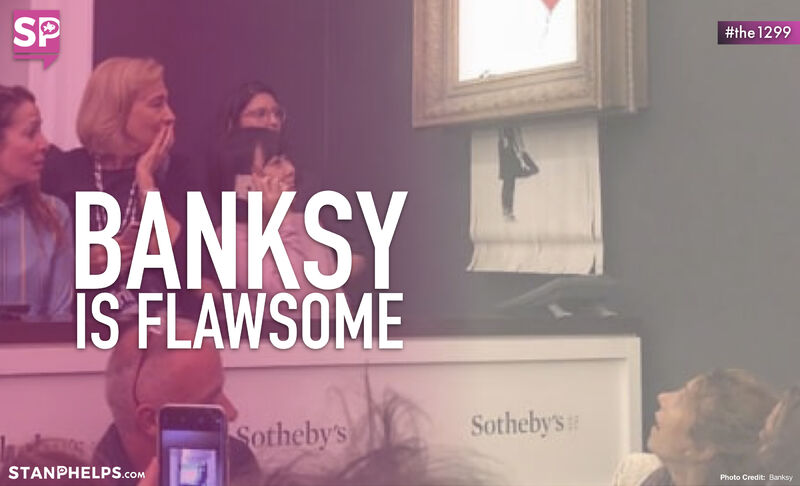 Three years ago, the enigmatic graffiti artist Banksy stunned the art world. Moments after the gavel was struck for the winning $1.4 million bid at Sotheby’s, the painting “The Girl with the Baloon” began to shred.

A shredding device was secretly hidden within the frame. More than half of the painting was sliced into thin strips. Oops. According to the artist, the shredder allegedly malfunctioned. The entire painting was meant to be sliced. Here’s the link to the video. “In rehearsals, it worked every time.”

The woman who was the anonymous winning bidder has now renamed the piece, “Love is in the Bin.” Next month the flawsome piece of artwork will again go up for auction. It is estimated that the painting could be sold for over $8 million. Its flaw has made it awesome.

One owner of a similar Banksy print shredded it in an effort to increase its value.

$8 million might be a steal for the first original artwork ever to be created live at auction. I bet it will fetch more.

Last year during the pandemic a Banksy piece called “Game Changer” sold for $23 million at Christie’s. The piece depicted nurses as superheroes. The proceeds were donated by the artist to the University Hospital in Southampton.

Is a Banksy worth it? Or are people just buying the name?

As part of a 31-day residency in 2013, the artist sold original artworks in New York’s Central Park alongside other street vendors. Priced at only $60, the works drew little interest from passersby. Only seven pieces were sold.

What can we learn as marketers from Banksy?

Banksy leverages the following three principles in the FLAWSOME framework:

Lopsiding – it’s not a mistake that Banksy chose “Girl with a Baloon” for the stunt. It is his best-known work. It originally surfaced back in 2002 in London. There are a limited number of signed prints of the work. Double and triple down on what makes you unique and different. In 2014, Justin Bieber had “Girl with a Baloon” tattooed on his arm.

Antagonizing – Banksy has never been shy about antagonizing some people. This effort was focused on criticizing certain elements of the art world. In the words of Matthew Israel, the piece is “entirely at odds with the aims of the auction house, where the condition of an artwork is paramount and the knowledge and expertise about it is core to its authority and value.” How could they have missed this?

Opposing – aren’t artists meant to crave the spotlight? One could say all graffiti artists remain anonymous to avoid prosecution. But Banksy has withheld his identity for nearly 20 years. He or she… remains steadfast, “If you want to say something and have people listen then you have to wear a mask. If you want to be honest then you have to live a lie.”