Wendy’s changes its name to ‘Meat’ 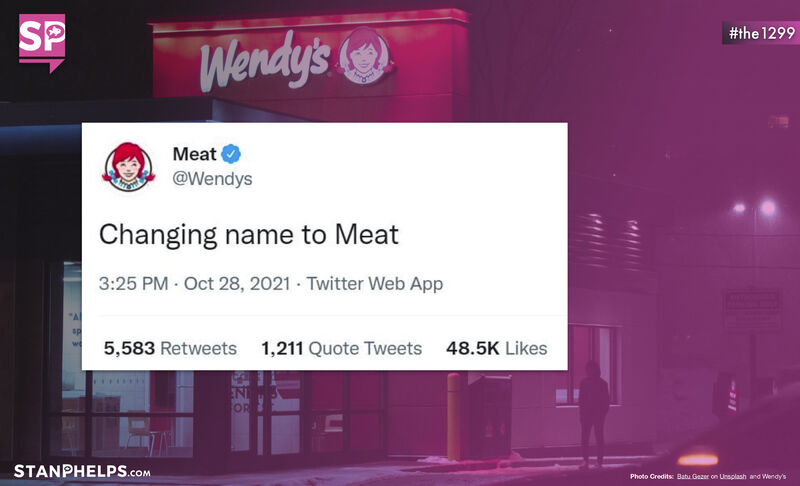 The Wendy’s Company changed its name on Twitter. They are now “MEAT.” LOL.

This tweet from last Thursday parodies the Facebook name change to META. It’s just one example of how the brand has leveraged a Pink Goldfish approach to social media. Thanks to Scott Monty for bringing it to my attention on LinkedIn.

Wendy’s is not alone. In the words of Katie McCall on Rival IQ,

“Many brands in the fast-food industry are embracing good old-fashioned roasting to stay relevant and top of mind among consumers, particularly the typically hard to impress Gen Z. Originally reserved for improvisational comedians, fast food restaurants are now roasting competitors and consumers in the form of quick-witted comebacks and sassy responses, and no one does it better than the self-proclaimed ‘First Lady of Fast Food,’ Wendy herself.”

The tweets by Wendy’s are an example of what David Rendall and I call microweirding. Little things you can do to express either more of what makes you weird or less of what is considered normal. After all, aren’t corporate tweets meant to be reserved, respectful, and measured.

Embracing this creative approach to brand expression doesn’t come naturally. It requires a cocktail of factors:

These are muscles that don’t flex easily in corporate life. And you don’t build this creative strength without repetition.

I experienced this back in October of 2012. I had the privilege of working on a campaign with OREO. The agency I was working for (Synergy) built a glass-enclosed office in the middle of Times Square. The experience was the culmination of an iconic 100-day social media campaign celebrating a century of this iconic cookie treat. Each day the brand would tweet a different version of an OREO.

A few of the examples included…

– a fin-shaped Oreo was perched in a glass full of faux milk.

– a multi-layered Oreo, each layer a color of the rainbow the day after San Francisco’s Gay Pride Parade.

Associate brand manager Danielle Brown shared to ClickZ.com at the time, “We’re thinking about what’s the next generation of a real-time campaign.” That comment was prescient.

Less than four months later, OREO would tweet in real-time during the Super Bowl. The lights went out during the 2013 game and the iconic “YOU CAN STILL DUNK IN THE DARK” tweet was born. That tweet doesn’t happen without the 100-day regimen.

Back to Wendy’s and its sass on Twitter. This departure from normal is beautifully captured in their Twitter bio: “We like our tweets the same way we like to make our hamburgers: better than anyone expects from a fast food joint.”