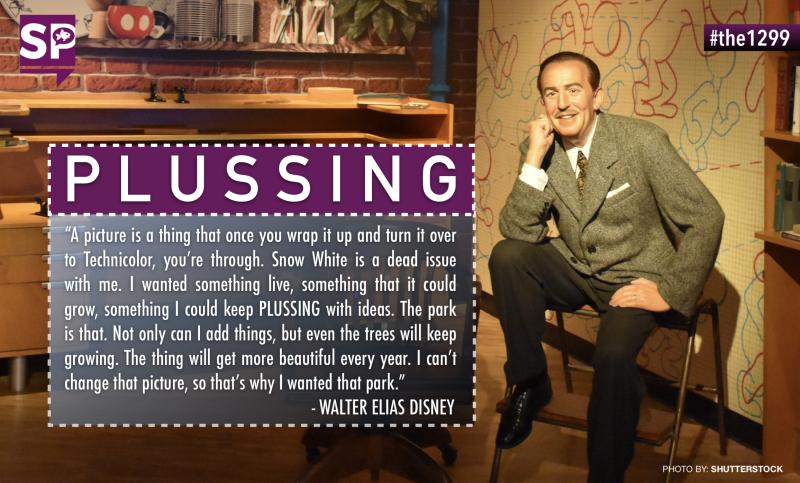 “Snow White is dead to me.” Why did Walt Disney prefer amusement parks over movies? A year ago I watched “The Imagineering Story” on Disney+. The miniseries chronicles the origin and development of WED Enterprises. Why WED? WED stands for Walter Elias Disney. The group of Imagineers was formed to concept and create Disneyland. Imagineering is a portmanteau of “Imagination and Engineering.”

Episode 5 shares a recording of Walt reflecting on movies and parks:

“A picture is a thing that once you wrap it up and turn it over to Technicolor, you’re through. Snow White is a dead issue with me. I wanted something live, something that it could grow, something I could keep PLUSSING with ideas. The park is that… I can’t change that picture, so that’s why I wanted that park.”

Never heard of PLUSSING? According to John Torre,

“To Walt, ‘plus’ was a verb—an action word—signifying the delivery of more than what his customers paid for or expected to receive. He constantly challenged his Imagineers to see what was possible, and then take it a step further … and then a step beyond that.”

TAKEAWAY: Your product/service is the movie. The amusement park is the differentiated experience (DX) you create, reimagine, and constantly improve.