“This tastes like sh*t! Blah!” Oatly highlights a negative piece of customer feedback to make a point 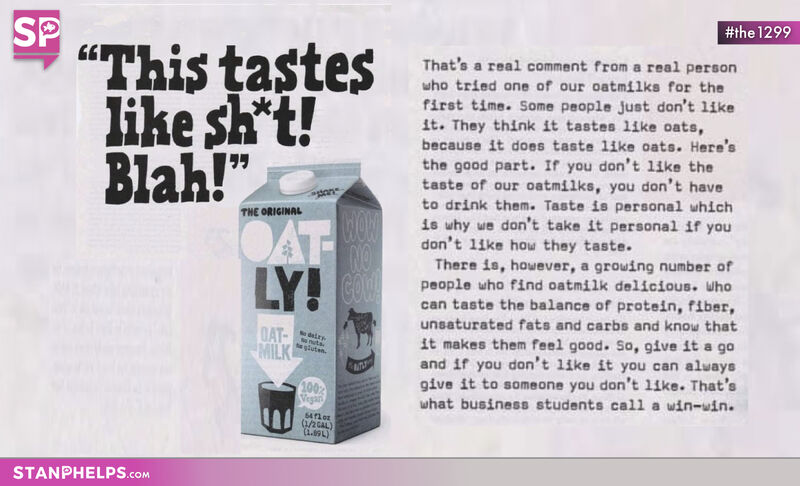 “This tastes like sh*t! Blah!” This is the headline of an actual advertisement from Oatly.

Oatly highlights a negative piece of customer feedback to make a point. Here is the copy from the ad:

“That’s a real comment from a real person who tried one of our oatmilks for the first time. Some people just don’t like it. They think it tastes like oats, because it does taste like oats. Here’s the good part. If you don’t like the taste of our oatmilks, you don’t have to drink them. Taste is personal which is why we don’t take it personal if you don’t like how they taste. There is, however, a growing number of people who find oatmilk delicious. Who can taste the balance of protein, fiber, unsaturated fats and carbs and know it makes them feel good. So, give it a go and if you don’t like it you can always give it to someone you don’t like. That’s what business students call a win-win.”

Oatmilk isn’t trying to be like regular cow milk. And that’s the point. It’s different. Swedish brand Oatly embraces it and exposes it by highlighting the negative.

Not familiar with Oatly? Oatly was founded by Swedish food scientist Rickard Öste in 1994. The brand remained obscure for two decades. Then new CEO, Toni Petersson began exposing the wastefulness and environmental impact of cow milk production in 2014. With new packaging and an antagonistic approach to marketing, the brand began to soar.

Today, being open and honest is a differentiator in business. As George Orwell, author of “1984,” once said, “in a time of universal deceit — telling the truth is a revolutionary act.” In other words, when everyone else is selling blue skies, you can distinguish your brand simply by being honest and transparent. The Pink Goldfish of Exposing is a powerful tool for standing out.

Takeaway – This immortal quote from Thomas J. Watson, Jr. captures the essence of Exposing, “Follow the path of the unsafe, independent thinker. Expose your ideas to the danger of controversy. Speak your mind and fear less the label of ‘crackpot’ than the stigma of conformity.”