“The world has taken Pink and turned it into this thing, a brand – a snarl.” -Alecia Beth Moore 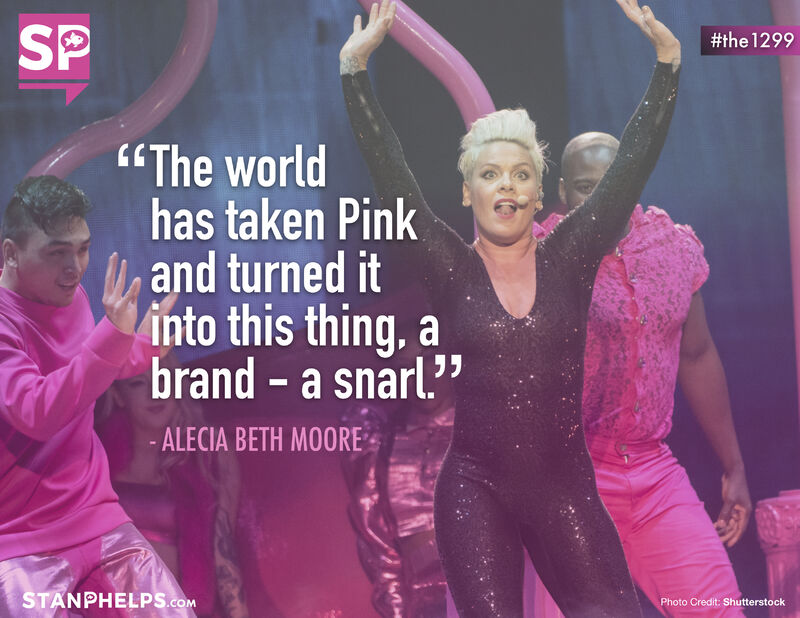 “Pink is what I do. Alecia is who I am. The world has taken Pink and turned it into this thing, a brand – a snarl.”

There is no better representative for the color pink… than P!NK, the Grammy award-winning singer and songwriter. But she wasn’t always pink. Her given name is Alecia Beth Moore.

P!NK didn’t change her name in a sophisticated attempt to brand herself. “It’s just a nickname that’s been following me my whole life. It started off as a mean thing.” After being publicly humiliated at camp, she blushed so intensely that everyone started teasing her and calling her Pink.

Years later, in the very popular film, “Reservoir Dogs,” Mr. Pink was a character played by Steve Buscemi with a “smart mouth.” This fit with her personality and confirmed her status as P!NK. She took an imperfection and flaunted it as a strength.

In a small world moment, Alecia would bump into Steve on the streets of Manhattan before her first album launched. She introduced herself and thanked him. He brushed her off, but for an interesting reason. Kudos to Steve Buscemi. Turns out he had a royal excuse.

Within a year her first album was certified double-platinum after it sold more than two million copies. She has continued her music career for more than 25 years. “Hurts 2B Human,” her most recent album, was released in 2019 and she has now sold more than 90 million albums. Her many awards include Billboard’s “Woman of the Year” in 2013 and #10 on VH1’s 100 Greatest Women in Music.

She’s not just Pink, she’s P!NK. David Rendall and I also use the ! as a replacement for the letter i on the cover of P!NK GOLDF!SH 2.0. Don’t call it an exclamation point, call it a snarl. Thank you Alecia Beth Moore.

To steal a quote from Miley Cyrus, “Pink isn’t just a color. It’s an attitude too.”