The word that spawned my Goldfish Series of books, a 13th donut, and a pink donut box 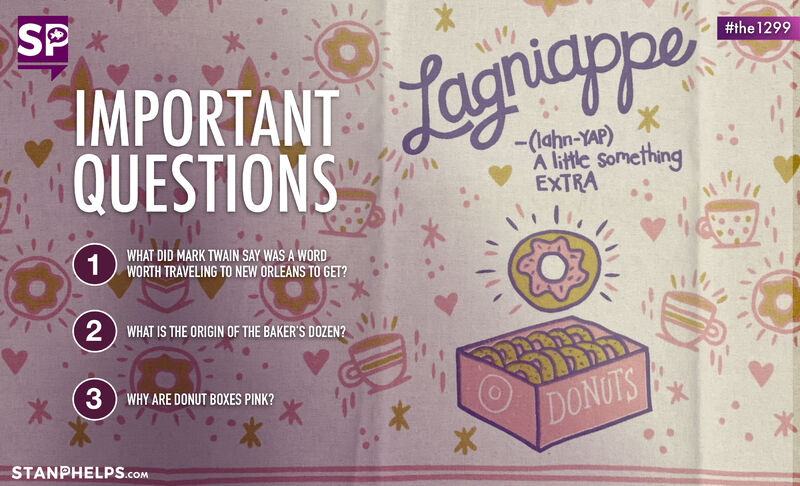 Friday Trivia Trifecta: 1. What did Mark Twain say was a word worth traveling to New Orleans to get? 2. What’s the origin of the Baker’s Dozen? 3. Why are donut boxes pink?

Background: Good friend and fellow speaker Tom Triumph was in New Orleans two weeks ago. In addition to delivering a Vistage workshop, Tom spent some time walking around the Crescent City. He visited one of my favorite shops called Fleurty Girl and brought home a gift for me. See the tea towel pictured below.

I absolutely adore it. It contains three things I love. The word that spawned my Goldfish Series of books, a 13th donut, and a pink donut box. Let’s unpack each:

1. What was the word that Mark Twain said was “worth traveling to New Orleans to get.”

It is a word that exemplifies the idea of doing a “little something extra” in business. That word is lagniappe. Pronounced LAHN-YAP, it is a creole word meaning “the gift” or “to give more.” The practice originated in Louisiana in the 1840s whereby a merchant would give a customer a little something extra at the time of purchase. It is a signature personal touch by the business that creates goodwill and promotes word of mouth.

2. Where did the practice of giving the 13th donut come from?

Buy a dozen donuts and get the 13th for free. Is this lagniappe? Kind of…

In order to understand the reasoning behind a baker’s dozen, we need to travel back to its origin in England. It dates back to the 13th century. During this time, there was a perceived need for regulations to avoid fraudulent activity.

The Assize (Statute) of Bread and Ale was instituted to regulate the price, weight, and quality of the bread and beer manufactured and sold in English towns and villages. Bakers who were found to have shortchanged customers could be liable for severe punishment. The worst of which was having your hand chopped off with an ax. To guard against the punishment, the baker would give 13 for the price of 12 to be certain of not being known as a cheat.

The irony is that the statute deals with weight and not quantity. The merchants created the “baker’s dozen” to change perception. They understood that one of the 13 could be lost, burnt, or ruined in some way while still leaving the customer with an actual dozen. The baker wasn’t doing it to honor the relationship initially. It was an act of self-preservation to protect their hands.

3. Why are donut boxes pink?

We owe the bubblegum pink boxes to Cambodian Americans in Los Angeles.
A Pink box first appeared in the 1980s. According to Food & Wine, “the new doughnut shops popping up sought to buy boxes that were cheaper than the white ones chains used, and (supplier) Westco had the answer: leftover pink cardboard stock. The “9-9-4,” as it’s apparently called in the industry, fit a dozen doughnuts perfectly. Pink boxes stuck around because thousands could be produced at a much cheaper price than their white predecessors.”