The Tale of Two Cousins 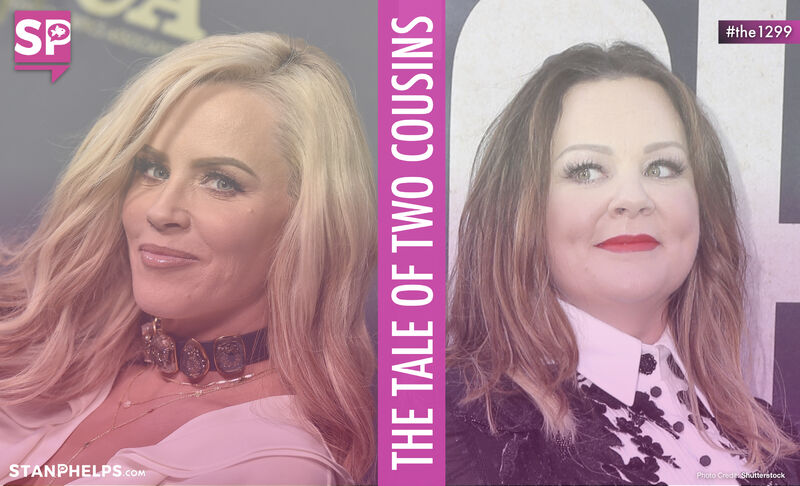 A tale of two cousins:

Jennifer is pretty. She has blond hair and blue eyes. She is relatively tall and thin, but with curves in all the right places. According to online sources, she is 5’ 7” tall and weighs 121 pounds. Her measurements are 38-24-35. She is attractive according to all of the classic American standards of beauty. Because of her stunning good looks, she became a very successful model and her fame increased. It started with television shows and then movies.

Melissa is pretty. She has brown hair and green eyes. She is not thin and not very tall. According to online sources, she is 5’ 2” tall and weighs 207 pounds. Her measurements are 43-38-45. She isn’t considered attractive according to most of the classic American standards of beauty. No one offered to hire her as a model.

Melissa was a little bit older. She was born two years before Jennifer. She had a front-row seat to Jennifer’s growing success. It would have been easy for her to be frustrated and jealous. She could have decided that Jennifer was lucky and she wasn’t. Jennifer was hot and she was not. She could have compared herself to all of Jennifer’s strengths, which would have highlighted her apparent weaknesses. But that’s not what she did.

Melissa pursued success by a different route. She didn’t try to be prettier and thinner and hotter than Jennifer. She didn’t try to become a more famous model. She became a stand-up comedian. She was hilarious. She ended up on television because she was funny. Then she ended up in movies. Now she has a star on the Hollywood Walk of Fame.

You might have already figured out that we are talking about the cousins McCarthy. Jenny became famous in 1993 when she was featured in Playboy. She starred in her own sitcom called Jenny, hosted her own talk show, co-hosted The View, and is a judge on The Masked Singer. She’s been in a few moderately successful movies, like Scream 3 and Santa Baby, but hasn’t become a bona fide movie star.

On the other hand, Melissa has become a superstar. In addition to her success as an actress and comedian, she is also a writer, producer, and fashion designer. Here is a shortlist of her many accomplishments:

A sampling of her movie and television credits include:
– Gilmore Girls
– Mike & Molly
– Identity Thief
– Bridesmaids

The story of Jenny and Melissa is a great example of the Pink Goldfish of Attacking. It looked like Jenny had all of the advantages, all of the strengths. It seemed like Melissa had a lot of disadvantages and weaknesses. It wasn’t likely that Melissa could ever even come close to being as famous and successful as Jenny.

But Melissa did more than just match Jenny’s success, she eclipsed it. She achieved this by competing on her own terms, by playing a different game. She didn’t try to be like Jenny, but better. She decided to be like Melissa, and it worked.

Takeaway: Own who you are.