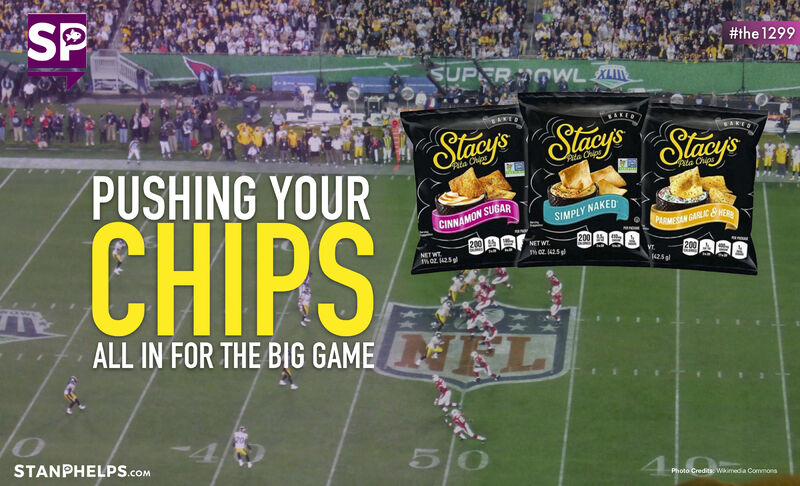 The best non-Super Bowl promotion ever. Fifteen years ago today the FedEx packages began to arrive all around the US. 133,000 black boxes to be exact.

Each black box contained five bags of pita chip snacks. The only other thing in the box was a short note of four words:

TO STACY, FROM STACY

It turns out there are 133,000 people in this country with the first or last name of Stacy. Stacy’s Pita Chip Company, Inc. founded by Stacy Madison was embarking on a massive sampling campaign just ahead of the Super Bowl.

If you spelled your name Stacey… no chips for you. Only Stacy’s like my friend and fellow CX speaker Stacy Sherman received the packages.

In lieu of buying a 30-second spot during the big game for $2.6 million, the company decided to put its money where viewers’ mouths were. The sampling program cost a little more than a million dollars.

I love this “super” promotion as an example of the Purple Goldfish of sampling. A little something extra thrown in for good measure. I have written how Bigelow Tea, SEPHORA, Kiehl’s Since 1851, Great Harvest Bread Co., and Starbucks leverage sampling as a powerful marketing tool. I call sampling the lowest hanging fruit in marketing.

A bit of background, Stacy Madison founded the chip company by way of sampling. Stacy and Mark Andrus had a food cart in Boston that served pita sandwiches. It became popular and lines began to form around the block.

To satiate the waiting, they took home the leftover pita bread each day, cut them into pieces, seasoned them with a dash of parmesan garlic or cinnamon sugar, and then baked them. They’d hand out little bags of pita chips to customers in line. At first, they were free, and then people were asking to pay for the chips. The chip company was born.

By 2006, Stacy’s Pita Chips reached $65 million in revenue. The company was sold to PepsiCo where it now operates under the FRITO LAY division. The price tag was a quarter of a billion dollars.

How are you giving a little extra to your customers? It’s a super idea.