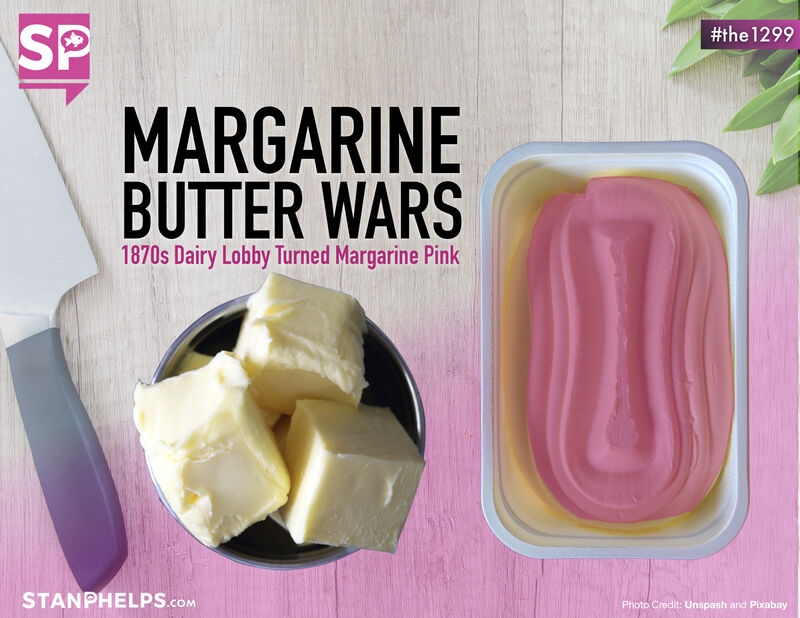 Ever heard of this smear campaign? The 1870s Dairy Lobby turned Margarine PINK.

Margarine, s’il vous plaît. Let’s go back 152 years. In 1869, margarine was invented in France. It was an immediate hit given the sky-high price for butter.

It only took one year for it to spread to the US. Oleomargarine was an instant hit here as well.

According to Rebecca Rupp in National Geographic, not everyone was pleased as punch. Its introduction came “to the universal horror of American dairy farmers.” Uh-oh. Within a few years, 37 companies were producing the yellow butter substitute.

Kat Eschner shared in the Smithsonian (see the great article in the comments), how their efforts, “resulted in the 1886 Margarine Act, which was the first of a series of laws imposing restrictive tariffs and fees on margarine producers. They didn’t all stick, but the damage to the burgeoning margarine industry was done. The spread was actually banned in Maine, Michigan, Minnesota, Pennsylvania, Wisconsin… and Ohio.”

It wasn’t banned in New Hampshire. The Granite State had another more colorful idea. In 1891, a new law regulated that any margarine sold must be tinted pink. Sellers of normal margarine faced stiff penalties. You could get whacked with a $100 fine (equivalent to almost $3,000 today) or 2 months in jail.

After 7 years of pink margarine, the Supreme Court of New Hampshire had enough. The court struck down that law according to reporting by Eschner,

“’Pink is not the color of oleomargarine in its natural state,’ the Court stated in its ruling. The law stating that margarine had to be colored pink rendered the product ‘unsalable,’ the court concluded: ‘To color the substance as provided for in the statute naturally excites a prejudice and strengthens a repugnance up to the point of a positive and absolute refusal to purchase the article at any price.’ The judgment argued that even though margarine producers were technically allowed to sell margarine—provided it was pink—they effectively couldn’t sell their product, because nobody would buy pink margarine.”

I love, love this story. Hat tip to my P!NK GOLDF!SH 2.0 co-author David Rendall for sharing it.

As we share in our upcoming book (launching July 5th), Pink is polarizing as a color. In the book, “Pink: The Exposed Color in Contemporary Culture,” Barbara Nemitz points out that pink seldom occurs in nature and is uncommon in architecture and design. Pink “attracts attention by virtue of its rarity in natural environments.”

Additionally, pink is one of the most infrequently used color terms.
Valerie Steele, in her book, “Pink: The History of a Punk, Pretty, Powerful Color,” argues that “pink always stands out from other colors, making it a special color.”

Pink the color of differentiation. It is perfectly imperfect.