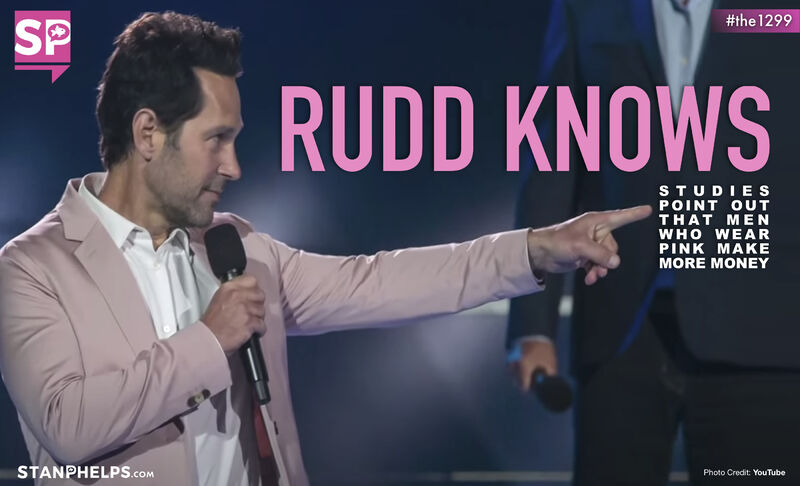 FYI Marvel fans and fashionistas, the Campus opens to the public today June 4th and the suit was made by Paul Smith.

Back to wearing pink and this more money thing. COTTON USA™ released a study showing that men who wear pink shirts make $1,600 more a year than colleagues who stick to traditional blue or white shirts.

In addition to the extra cash, there are some other fringe benefits:

This is music to my P!NK GOLDF!SH 2.0 co-author David Rendall. He wears head-to-toe Pink on stage. His unconventional commitment to pink makes him memorable.

David has lopsided pink and it has become inextricably linked to his brand. It’s on the cover of his books. It’s on his website.

It’s everywhere, even off-stage. Because he competes in Ironman triathlons and ultramarathons, he had his bike custom-painted pink. He also has a pink helmet, sunglasses, hat, tri-suit, and socks. Even his wedding ring is pink, thanks to QALO.

More than once David has been approached in an airport
by someone who recognized him because of his pink clothes. David receives pink gifts from his clients and fans, most notably, pink underwear and a pink cowboy hat. His Instagram feed is a constant barrage of interesting pink objects, like cars and buildings, sent from people all over the world.

In the past, I’ve ribbed David Rendall about the superiority of Purple over Pink. And the study backs this up. It turns out I might need to lighten up a bit though. Men who wear lilac shirts have the most office romances and a better chance of receiving promotions.

One geographical caveat and an interesting note:

1. This was a British study. Mileage might vary outside the UK.

2. Is this preference deep-seeded? Throughout the 1800s and into the early 1900s, pink ribbons or decorations were often worn by young boys in England. That’s right. Boys. They were considered small men, and while men in England wore red uniforms, boys wore pink. Pink was seen as a more masculine color than light blue. Let that sink in for a minute. Pink was considered masculine. Pink was strong. Blue was delicate. Theories to explain this have varied over the years, but it’s generally believed that blue was associated with the Virgin Mary, hence its more feminine connotations, while pink was linked to red, which was seen as a strong and masculine color.

Questions: Are you on TEAM PINK or TEAM PURPLE? Why do you think men in pink make mo’ money?