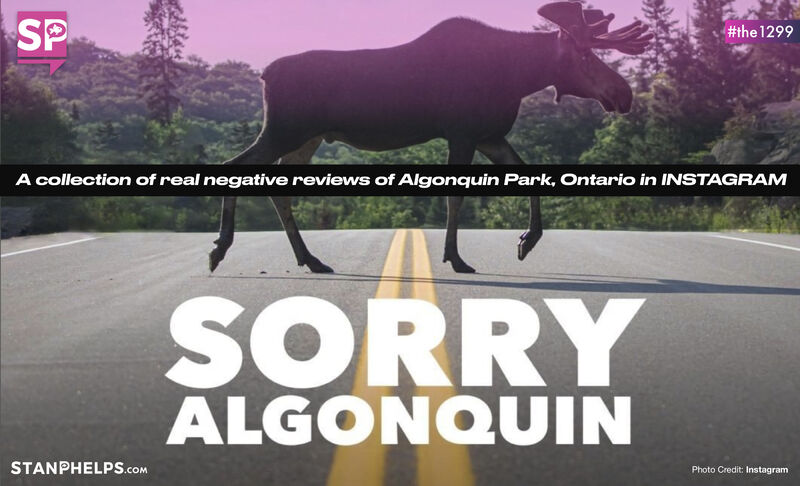 @SORRYALGONQUIN. This is the title of an Instagram account. It is a collection of real negative reviews of Algonquin Park, Ontario managed by photographers Jesse and Susan Villemaire.

Here are a few gems from the series of stunning images:

“We decided on this trail based on the name and thought we would see a river or two. We were wrong – just trees.” [False advertising alert]

“Not impressed with the lack of signage to get water” [H20uch]

This Pink Goldfish strategy is what David Rendall and I call Exposing. Exposing is about owning the negative about you.

Exposing challenges you to take pride in your unique characteristics. Emphasize them, expose them, and openly display them. Don’t ever apologize for them.

David and I feature @subparparks in our book “Pink Goldfish 2.0.”

For example, Amber illustrates a one-star review about the Grand Canyon, “A HOLE. A VERY, VERY LARGE HOLE.”

– For Hawaii Volcanoes National Park, “DIDN’T EVEN GET TO TOUCH THE LAVA”

– For Bryce Canyon National Park, “TOO ORANGE, TOO SPIKY”

According to an interview in Midwest Living, Amber created the account as a “snarky love letter” to the National Parks System. In her words,

“When I discovered that there were 1-star reviews for every single one of the 62 national parks, I set out to illustrate each park along with a hand-lettered 1-star review as a way to put a positive, fun spin on such a negative mindset.”

Takeaway: If you try to please everyone, you please no one. Why not have a little fun with the haters by exposing them?

In the words of Gerald Weinberg, “If you can’t fix it, feature it.”