RIP John Madden. We should all be a little more like Madden 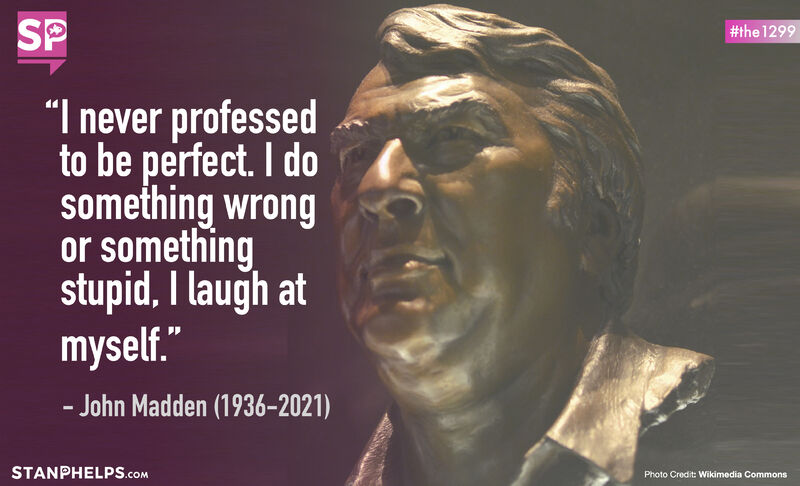 RIP John Madden. He was the first to say, “Football is Life!” Actually, he said, “Football is my life. It’s something I say proudly. But, it’s complicated.”

Madden was a trailblazer. Whether it was playing, coaching, broadcasting, or … video gaming, he did it the Madden way.

Let’s look at each:

Playing – John Madden once said, “The road to Easy Street goes through the sewer.” That summed up his playing career and road to coaching.

Madden played one season at the College of San Mateo before being given a football scholarship to the University of Oregon. He never saw a down as a Duck. Madden was redshirted because of an injury and had a knee operation. He then played for Grays Harbor College in the fall of 1956, before transferring to Cal Poly in San Luis Obispo. At Cal Poly, Madden played both offense and defense winning all-conference honors at offensive tackle.

If you are keeping score . . . that’s four schools. Did Madden invent the transfer portal 60+ years ago? Madden was drafted in the 21st round by the Philadelphia Eagles. In his first training camp, he suffered an injury to his other knee. His professional career was over before playing a down.

Madden would begin his coaching career at the collegiate level. After stints at Allan Hancock College and San Diego State, Madden would take a job as linebackers coach for the Oakland Raiders. After two seasons, Al David made him the Raiders’ head coach in 1969. At age 32, John Madden became the youngest head coach in the history of the league. He took the Al Davis, “Win baby!” mantra to heart. Madden would win 103 regular-season games and one Super Bowl before retiring at age 42.

Broadcasting – Madden’s colorful delivery won him critical acclaim and 12 Emmy Awards for Outstanding Sports Event Analyst. The man had his own lexicon with words such as “Whap!”, “Bang!” and “Doink!”‘ Madden would work as a broadcaster for CBS, NBC, ABC, and FOX. His enthusiastic use of the telestrator helped to popularize technology in sports. At one point, Madden made more money as a broadcaster than any player in the NFL.

Video games – Beginning in 1998, Madden lent his voice, personality, and name to the Madden NFL series of football video games, published by Electronic Arts (EA). He would view the game as an educational tool. My teenage boys don’t know Madden as the famed coach and broadcaster, they know him as the game only.

What I personally love about Madden was how he embraced his flaws. Whether it was being afraid of flying or making up words like turducken, those idiosyncrasies were the things that made him uniquely special. He never apologized for who he was and never professed to be perfect. We should all be a little more like Madden.