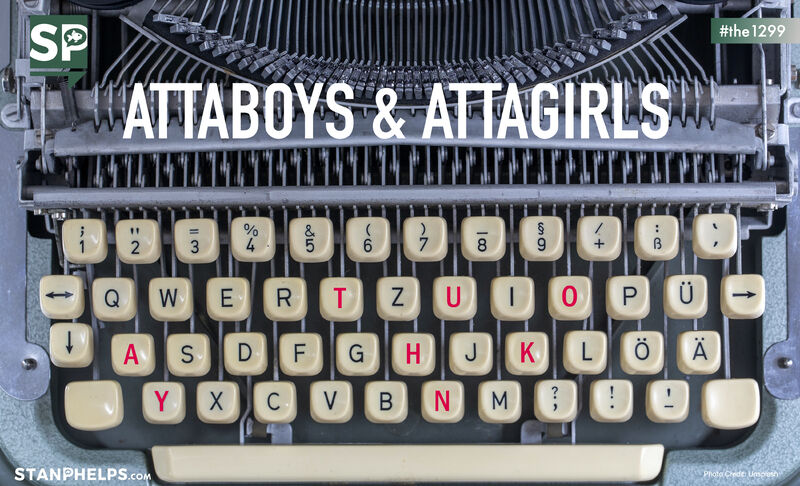 Recognition matters. Studies show that 43% of highly engaged employees receive feedback at least once a week compared to only 18% of employees with low engagement.

Recognition resonates in the workplace. 35% of workers frequent recognition of accomplishments as the most effective non-monetary reward. Thanking people for their hard work and commitment is key to making them feel appreciated.

I can distinctly remember having a conversation with a law school classmate named John. John was from South Carolina. He was sharing his thoughts about his summer job working in a law office in Columbia, SC. I asked him if he’d considered staying on full-time after school, he shook his head,

When I prodded further, John revealed that he had an issue with the partner that was managing him.

“He doesn’t give any attaboys.”

Attaboys…. I had never heard that word before, but no explanation was needed. John felt that his work wasn’t appreciated or recognized.

Recognition fuels a sense of worth and belonging in individuals.

Shift your thinking. Most leaders take an “if, then” approach to recognition. Instead, view encouragement and recognition as a driver of high performance.

Here is some encouraging news. It’s not just about the money, honey. Research confirms that the cost of recognition awards has only minimal impact on employee perception of appreciation. 57% reported that the most meaningful recognition was free.

Just look at some of these quotes to judge the impact:

• “I received a handwritten thank you in the mail from my manager and my CEO. I smiled like an idiot.” – Bill A.

• “I got a bonus with a handwritten note. I read the note several times; even took a picture of it. Bonus was good, too, but no picture.” – David H.

Takeaway – Don’t just make it a priority. Heed the advice of productivity guru Dave Crenshaw and schedule it. Schedule time in your calendar each week to focus on recognition. Write a few notes or make a few phone calls.