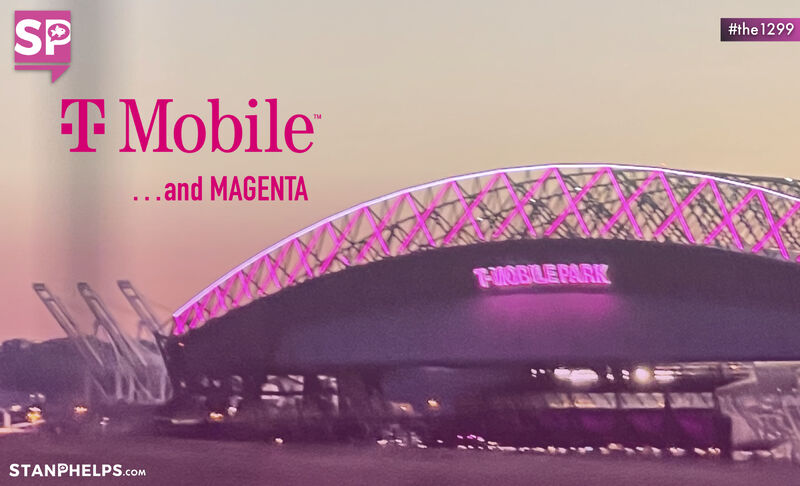 Sometimes the opposite of a good thing is also a good thing. According to Barbara Nemitz, the author of “Pink: The Exposed Color in Contemporary Culture,” the color pink contains,

“An extraordinary number of contradictory qualities. . . The pink spectrum can embody practically anything; surface and interior, happiness and suffering, delight and injury, the naive and the corrupt, the sublime and the ordinary, the playful and the existential.”

In other words, pink is full of opposites. Pink is also a color that can be used to oppose the competition.

T-Mobile is so committed to pink that they’ve trademarked their particular version of the color (RAL 4010). They call it magenta, and they aren’t messing around. When Aio Wireless started using a similar color (Pantone 676C) in 2014, T-Mobile sued.

They argued that “letting Aio continue to use a variant of magenta would cause [T-Mobile] irreparable harm.” T-Mobile won the exclusive right to their shade of pink and apparently “nearby colors” as well.

Their former CEO, John Legere, would wear a pink T-shirt or a satin pink jacket or pink shoes. That’s unusual. Most big company CEOs wear suits, not T-shirts. Legere argues that pink and his casual style are part of the company’s identity as the “uncarrier,” the opposite of the other carriers.

Pink marks T-Mobile as unique from all the other mobile giants who have chosen traditional CEOs and traditional colors, such as blue (AT&T), red (Verizon), yellow (Sprint), and blue/red (US Cellular).

Pink isn’t a primary color. Experts and studies indicate that most people don’t like pink. Using pink as a mass-market corporation is a great example of the Pink Goldfish of Opposing. It works because it is an obvious contrast to what the rest of the industry is doing. It stands out.

Opposing isn’t for the faint of heart. It involves defying, resisting, and fighting. It’s refusing to give in, to yield, to submit, to surrender to the pressure to conform, to fit in, to follow the crowd.