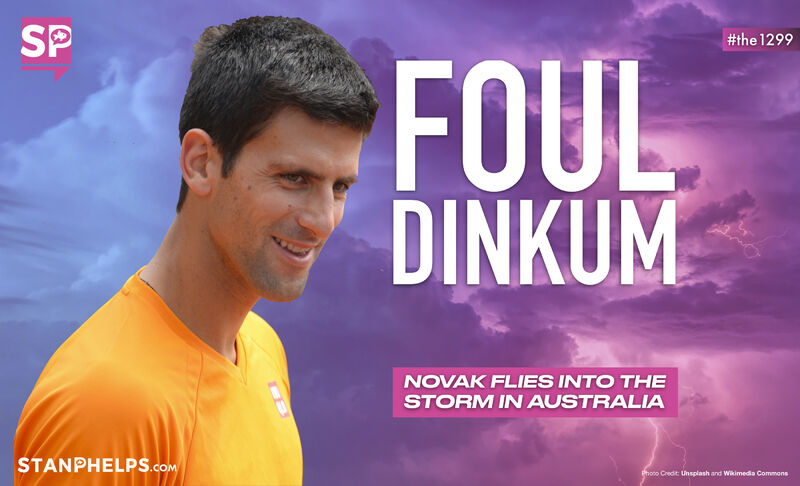 Novak Djokovic headed to Australia after receiving a medical exemption from the Australian Open. The World #1 and reigning champion announced the news on Instagram.

Novak is one of only five unvaccinated players out of 26 to receive an exemption into the first Grand Slam tournament of the year in Melbourne.

The reception in Australia of the news has been downright hostile. Its citizens and the federal government are kicking up their heels for a variety of reasons:

– They comply with restrictions. Melbourne has spent more time under COVID-19 lockdowns than any other city in the world. It’s 5 million residents have withstood over 250 days during six lockdowns.

– The country takes vaccinations seriously. As of today, 94.5% of Australians over the age of 16 have received at least one shot of the vaccine. Over 91% are fully vaccinated.

– COVID is spiking right now with Omicron. On Tuesday, Australia had a record daily tally of nearly 50,000 COVID cases. People are scrambling and waiting in hours-long lines for tests.

– Novak hasn’t disclosed the reason or excuse that has allowed him to be granted an exemption.

The last reason is the most important in my opinion. I lived in Australia for a year and can attest to an Australian phenomenon called the “Tall Poppy Syndrome.” This is the idea that everyone is as good as his or her mate. David Rendall and I wrote about it in “Pink Goldfish 2.0.” It is the cultural practice of mocking people who think highly of themselves. If you try to rise above others, you will get cut down.

With the exemption, Djokovic will not be required to quarantine and will enjoy the same freedoms in Melbourne as someone who is vaccinated.

Djokovic is typically a fan favorite in Australia. Nine of his record-tying 20 Grand Slam victories for the Serb have happened Down Under. But last year, his attempts to secure better quarantine conditions for players lacked tact and turned many Aussies against him. This exemption isn’t going to help.

There is an Australian saying that comes into play here. It’s called “fair dinkum.” Fair dinkum is used to emphasize or seek confirmation of the genuineness or truth of something. That’s what awaited Novak when he landed.

Prime Minister Scott Morrison has made it clear there will be “no special rules” for Djokovic, “If that evidence is insufficient, then he won’t be treated any different to anyone else and he’ll be on the next plane home.”

Right now as I type, Novak has been denied a Visa by the Government.

Will Novak share the reason behind his exemption? I wouldn’t count on it.

Djokovic recently described questions about his vaccination status as “inappropriate” in an interview with the Serbian outlet “Blic.” He shared, “Your editors can take what I have just said and turn it into a scandal. I do not want to be a part of that storm.”