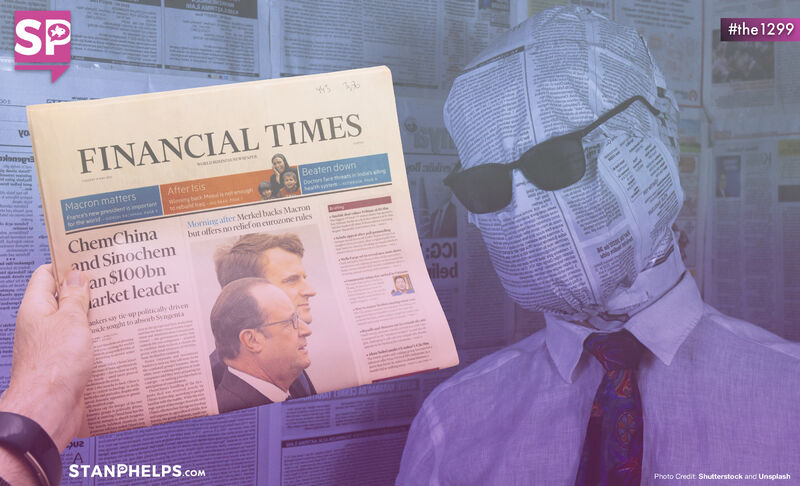 It was 1893 in London, and Douglas Macrae, the publisher of the Financial Times, was looking for a way to distinguish his newspaper from the competition, the Financial and Mining News.

In Pink Goldfish 2.0, David Rendall and I profile the important decision he made. Macrae decided to use pink paper in order to stand out with the following explanation.

“In order to provide outward features which will distinguish the Financial Times from other journals, a new heading and distinctive features will be introduced, and the paper will be slightly tinted.”

An article in Braithwaite argues that the decision to use pink paper “would turn out to be the most significant branding step the company would ever take.”

Initially, it was cheaper to use pink paper than to print on white paper. This is because paper has to be bleached in order to make it white. It is somewhat pink earlier in the process, so they didn’t need to dye the paper to make it pink. They just eliminated a step in the process.
However, pink became such a powerful part of their brand that they made the paper even pinker over the years, and now they actually pay extra to keep the color just right. They even extended the pink onto the background of their current website.

It is important to note that this wasn’t a big decision at the time. Even the paper described the new color as “slightly tinted.” This was a small change, a swerve. It wasn’t a huge transformation. It was a swerve. But it was a minor adjustment that had a major impact.

More than 125 years have passed since the Financial Times went pink and they are still going strong. As other newspapers are disappearing in response to the rise of digital and social media, they are thriving. In a 2015 article in Quartz, Zachary Seward described them as “one of the world’s most distinctive news brands.”

Indeed, they were sold to Nikkei that same year for $1.3 billion.