Monet sucks. That was the consensus of critics in the 19th century 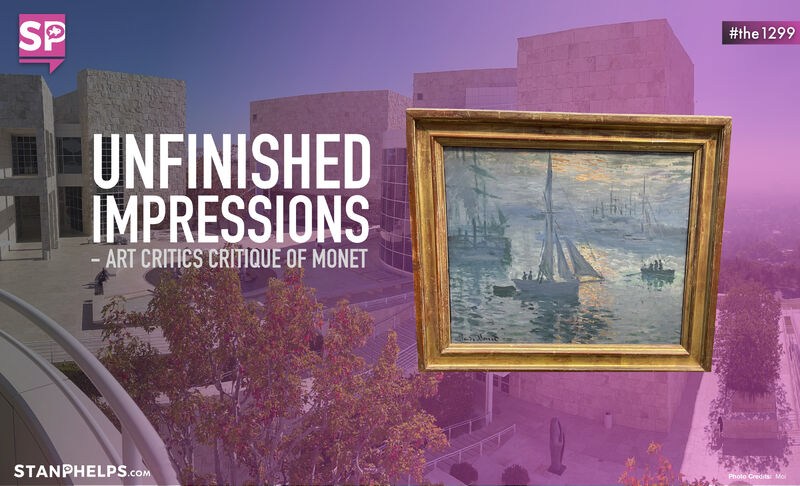 Monet sucks. That was the consensus of critics. The rapid, sketch-like execution shocked the art world in the 19th century.

Yesterday, I visited the J. Paul Getty Museum in Los Angeles. This was the third amazing museum I’ve had the opportunity to experience in the last 30 days. The others were the Denver Art Museum and the Whitney in New York.

Back to Claude Monet. The Getty has “Sunrise (Marine)” on display. The painting below is breathtaking. It depicts the early morning light, diffused by fog and smoke, on the shimmering water of the French Harbor of Le Havre.

“Sunrise” was one of the works that sparked the birth of Impressionism. The term was born out of another Monet painting titled, “Impressions of a Setting Sun.”

Critics bristled against the early works in the movement. Because they were different. They considered the works unfinished impressions rather than full-fledged pictures. To deviate from the standard is also seen as wrong and dangerous, so the critics responded with disdain and mockery.

It can be risky to stick out. Because of this, we tend to give up on being truly different. Instead, we just do what the competition is doing.

As a freshman at Marist College, I hadn’t declared my major. This gave me the opportunity to take a variety of courses. One was an 8:15 a.m. class called “Arts and Values.” This would be my first introduction to Impressionism and spark my love for art.

I remember learning about Édouard Manet. He quickly became one of my favorites in the Impressionist movement. In 1863, Manet’s work was rejected for the annual Paris Salon, along with Camille Pissarro and James McNeill Whistler. Admission to the Salon was critical to the success of an artist. The Salon jury tended to be conservative and favored near-photographic but idealized realism.

Undaunted, Manet and friends pushed back. The protests were loud enough to reach Napoleon III.

With that declaration, the Salon des Refusés (Exhibition of Rejects) was born. According to Wikipedia, “Visitors pushed to get into the crowded galleries where the refused paintings were hung, and the rooms were full of the laughter of the spectators… But the critical attention also legitimized the emerging avant-garde.”

Those who laugh last, laugh best.

When the fourth edition happened in 1886, the popularity of the Paris Salon had declined for those who were more interested in Impressionism.