LEGO to give hospitals free MRI sets for kids 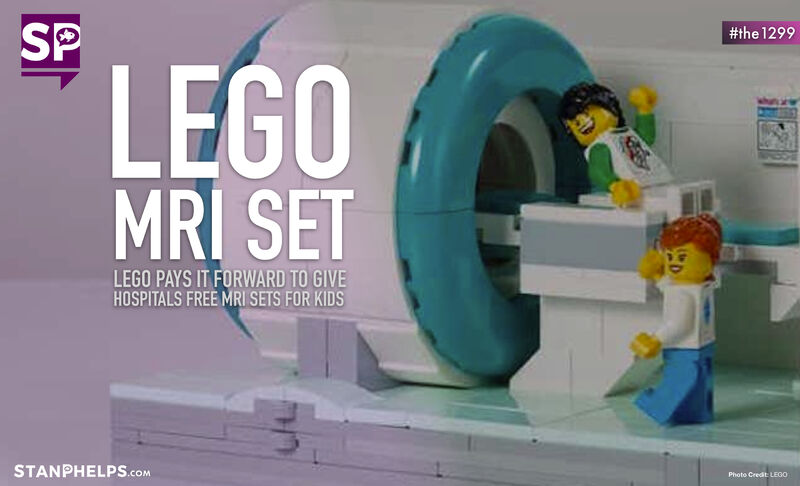 It’s a magnetic resonance imaging machine. MRI’s are unnerving for adults. My good friend and fellow speaker Peter Agiovlassitis just had a bad experience in one this past week.

It was going well as Peter listened to one of his favorite bands AC/DC. Then he made the cardinal mistake. As the machine whirred and clanked around him… he opened his eyes. A minute later he was out of the MRI with an incomplete scan.

As bad as it is for adults, imagine what a child must experience. That’s where the LEGO Group comes in. They have launched a new community engagement program where they provide complimentary LEGO MRI sets to hospitals.

This will allow children to learn all about MRI’s before undergoing the real scan. Credit to LEGO employee Erik Ullerlund Stæhr for the idea. His goal was to reduce anxiety and make their experience more playful and less scary.

In Yellow Goldfish, co-authored with Rosaria Cirillo Louwman, we shared a similar solution involving GE Healthcare and a brilliant idea by Doug Dietz.

Here’s the quick story. Doug was part of a team that created a brand new, beautiful GE MRI machine. While he was proudly waiting to see his design live in the hospital, Doug encountered a young patient about to be scanned. She was clearly terrified, tears rolling down her face. Doug suddenly saw the situation through her eyes. He was gutted.

“The room itself is kind of dark and has those flickering fluorescent lights,” he remembers in his TEDx talk. He added, “that machine that I had designed basically looked like a brick with a hole in it.”

This moment altered his perspective forever. He knew he had to make a change. The goal was to make the MRI experience less terrifying. How could he create an experience that children would love?

From this new approach came an amazing series of story adventures and decorated rooms. The child enters something like a pirate ship for the scan. Their imaginations are fired up with an adventure and the scan is done with no stress.

Here’s the best part of the story. Patient satisfaction scores went up to 90%. Children suffered less anxiety during their MRI scans. Some even ask their parents if they could “come back tomorrow” and do it again. Employees benefitted from the lack of drama. Society benefitted as scans are more accurate and can be done more quickly.

As for my buddy Peter A., there is no LEGO playset or grand adventure planned for next week. Just some soothing music and a valium for his next scan. And perhaps an eye-mask just in case.