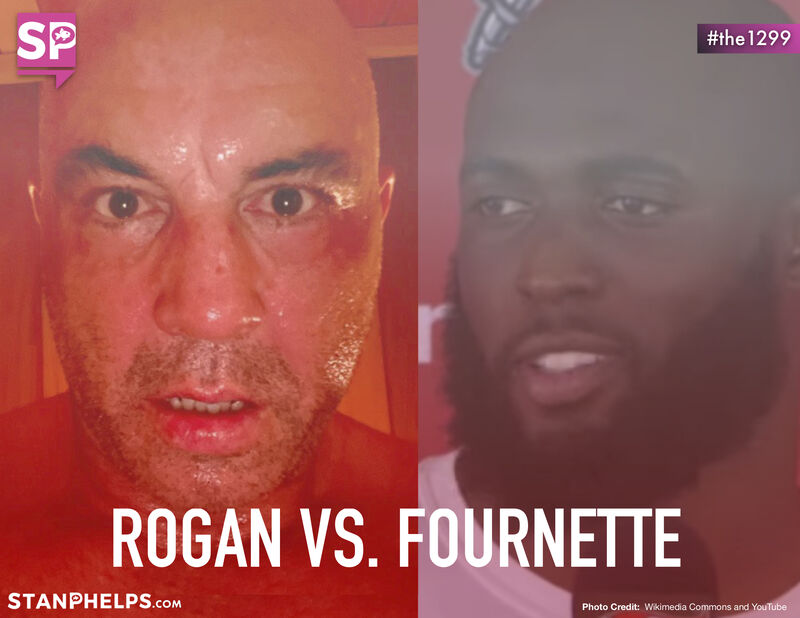 Joe Rogan versus Leonard Fournette on the UFC… The Unvaccinated Fight Club.

In this corner, let’s start with Leonard Fournette.

Fournette is a running back that plays for the reigning Super Bowl Champion Tampa Bay Buccaneers.

Back in July, Fournette tweeted, “Vaccine I can’t do it.”

Last week, the Bucs announced that the entire team and organization is 100% vaccinated. Fournette is part of that group.

The potential repercussions for an outbreak could be fatal to a team with playoff aspirations.

According to the NFL, if a game cannot be rescheduled during the 18-week season in 2021 due to a COVID outbreak among unvaccinated players, the team with the outbreak will FORFEIT and be credited with a loss for playoff seeding.

According to ESPN, Fournette shared,

“It’s something I wanted to do, trying to put the team [out of] harm’s [way]. People are still catching it, but it makes it a lot better to have the shot. We need every hand in here for these next couple big games we’ve got coming up.”

In the far corner, we have Joe Rogan.

Last week comedian Joe Rogan was in Tampa for a show. Rogan performed there as well as Orlando and Ft. Lauderdale.

For background, Florida has banned any mask or vaccine mandates. As a result, it is currently experiencing its highest-ever surge in virus infections. There are more than 15,000 hospitalized and the death rate is considerably higher than any other state in the country.

Rogan started to feel ill over the weekend after returning home to Austin. This Wednesday he announced that he tested positive for COVID. Rogan has been against vaccinations, especially for young people.

Rogan, in his words on Instagram, threw the “kitchen sink” at the virus. He took:

That last one is interesting.

Ivermectin is primarily used as a veterinary deworming agent. The FDA has warned Covid-19 patients against taking the drug, which has repeatedly been shown as ineffective for them in clinical trials. They tweeted recently,

Rogan recovered, “A wonderful heartfelt thank you to modern medicine for pulling me out of this so quickly.”

Can they throw the “kitchen sink” at the virus? The NAD drip alone (not covered by insurance) can be $750 per treatment.

Did Rogan just get lucky? He’s a healthy 54-year-old with no comorbidities.

Other anti-vax on-air personalities haven’t been so fortunate:

– 61-year-old radio host Phil Valentine derided vaccines died of COVID. He had been taking Ivermectin at the time.

– On his deathbed, 65-year-old Florida radio-host Dick Farrel changed his tune, telling his friends to get vaccinated.

Takeaway – Be a team player. Don’t be a Dick. Get vaccinated.