Is the customer always right? 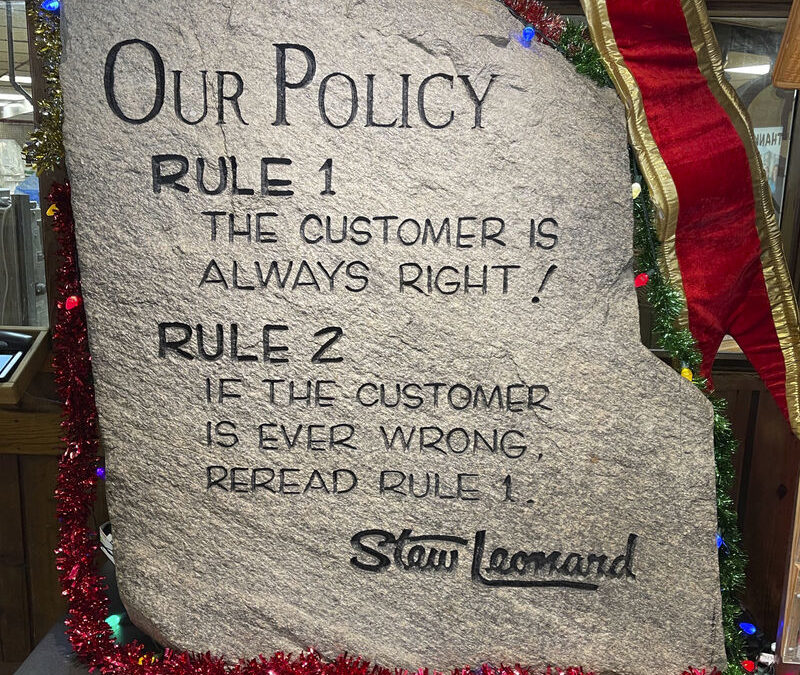 Is the customer always right?

At Stew Leonards, they always are. The world’s largest dairy store lives by two rules that are literally written in stone:

Today I stopped by the original store in Norwalk, Connecticut. I snapped a picture below of the iconic 6,000 pound stone at the entrance.

Then I had an eggnog ice cream in honor of its origin story.

Two weeks after the grand opening in 1969, Stew, Sr. was standing at the front door of the store greeting customers.

Suddenly a customer came up to Stew and said, “YOUR EGGNOG IS SOUR!” and thrust into his hands a half-gallon carton.

“My eggnog is sour, from my brand new dairy plant? Impossible! “You’re wrong! It can’t be sour. We’ve sold over 200 half-gallons of eggnog from this batch and you’re the only one who’s complained!”

The customer was so mad, veins were popping out in her neck. She said, “I don’t care how many cartons you sold, it’s sour and I want my money back!”

Eggnog was 95 cents per half-gallon so Stew reached into his pocket and gave the customer a dollar bill.

She snatched it out of his hand and stormed out. The last words he heard her say were…

“I’m never coming back to this store again!”

That night, Stew relayed the story to his wife, Marianne. Instead of a sympathetic ear, she became visibly upset,

“I don’t blame her at all,” said Marianne. “You didn’t listen to her. You contradicted her and practically called her a liar. I hope you are not going to run your store like other store managers, who think all customers are trying to put something over on them. They don’t trust us — but we fix them — WE JUST NEVER GO BACK!”

After thinking about it, Stew realized that he had everything in the world tied up into the dairy store. He could not afford to lose a single customer by telling them they were wrong. He realized that most customers were honest and wouldn’t try to take advantage of him.

However, if he tried to protect himself from the 1% who were dishonest, he’d end up penalizing the other 99% who were really good and honest!

Stew decided Marianne was right and that no customer was ever going to be wrong in my store again.

On his way to work one morning, Stew drove by a monument yard in Westport, where they were unloading granite. Suddenly, Stew got an idea. He stopped and bought a huge 3-ton slab. Then Stew had the rock delivered to the front door of his store and had their stonemason chisel the store’s new 2-rule policy into its face.

To this day, 52 years later, the rock still stands firm at each of Stew Leonard’s store entrances.

Every single team member knows of the eggnog story. They know that they can do anything in their power to make the customer happy.

Because happy customers not only come back, they bring their friends!

Stew Leonard, Jr. has now been at the helm since 1987. There are now six more stores in the tri-state area: Danbury and Newington, CT; Yonkers, Farmingdale, and East Meadow, NY; and in Paramus, NJ.

Stew Jr.’s attitude toward customer service can be traced back to his grandfather. Charles Leo Leonard, ran Clover Dairy, a small home-delivery dairy business that began in the 1920s.

“My grandfather didn’t know the difference between a friend and a customer. My father grew up in his footsteps. When he opened the retail store, he wanted it to be the same. He didn’t look at the people coming in as customers; he looked at them more like they were friends or neighbors…That’s the philosophy that was handed down. Treat the customer like a friend or a neighbor; somebody you really want to help out.”

Relationships over transactions. “People come in the store and they’re treated as part of the family. I think that’s very important for us. It’s a competitive advantage.”

Is this approach working?

Yes. The store earned an entry into “The Guinness Book of World Records” for having the greatest sales per unit area of any single food store in the US.