“If you want more stories told about you, you need to be worthy of a story.” -Jay Baer 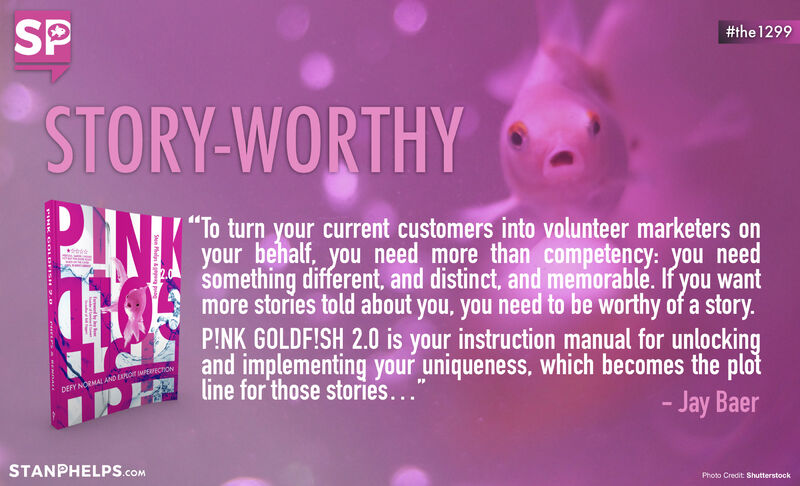 Are you STORYWORTHY? Dave Grohl is. “If you want more stories told about you, you need to be worthy of a story.” This is my favorite quote from the Foreword for Pink Goldfish 2.0 by Jay Baer.

Earlier this week, Grohl and his band the Foo Fighters released an “actual” album under the name the DeeGee’s. Yes – that’s Dave’s initials phonetically, but it’s an homage to the Gibb brothers and the legendary disco band the BeeGee’s.

The microweird name of the album is called “HAIL SATIN.” That’s satin as in the popular 70’s polyester, not an invitation for devil worship.

[By the way, I once heard a sad story about an evil dyslexic. It turns out it had a happy ending. He sold his soul to Santa]

The band provided a glimpse of their new disco diversion back in February for the BBC. They performed “You Should Be Dancing” for Jo Whiley’s “Sofa Session.”

The show asked the Foo Fighters to perform a cover, and Grohl explained that they chose the song after a discussion about a recent Bee Gees documentary. Not afraid to flaunt it, Grohl declared, ‘Let’s do it like the Bee Gees.’ He sings the lyrics in falsetto.

The album contains five BeeGee’s covers. The B side is five live cuts from their most recent album.

“Hail Satin” dropped on 7/17 as part of Record Store Day. In a classic withholding play, you can only purchase the album on vinyl.

As for antagonizing, the band performed earlier this week in California. No vaccine = no ticket. This of course pissed off the anti-vaccers who protested outside the venue. They called the practice “segregation.” Boo-Foo.

The Foo Fighters are flawsome. Dave especially. Six years ago the band was playing a concert in Sweden. Dave missed a ramp during the second song and fell into a pit breaking his leg. The doctor reset his ankle and he finished the show.

Did the band cancel the tour? No.

Did he hobble around with a cast? No.

Grohl and the band highlighted the flaw by creating a huge throne to sit on while performing.

He shared with Entertainment Weekly in an interview, “The shows we’ve been doing lately are some of our favorite shows we’ve ever done, and I’m not f—ing kidding. We talk about this after every show in the dressing room: What seemed like some sort of setback at the time has turned into this beautiful blessing in disguise, where this throne and these crutches and these audiences make us play longer and harder than we ever have. It’s this whole new energy in the show.”

The Foo Fighters understand something vitally important in business. In Jay Baer‘s words, they know that if you want, “To turn your current customers into volunteer marketers on your behalf, you need more than competency: you need something different, and distinct, and memorable. If you want more stories told about you, you need to be worthy of a story.”

Jay continues in the Foreword, “P!NK GOLDF!SH 2.0 is your instruction manual for unlocking and implementing your uniqueness, which becomes the plotline for those stories.”