“I thought it was too dark, too sad, too intense.” -Taylor Swift 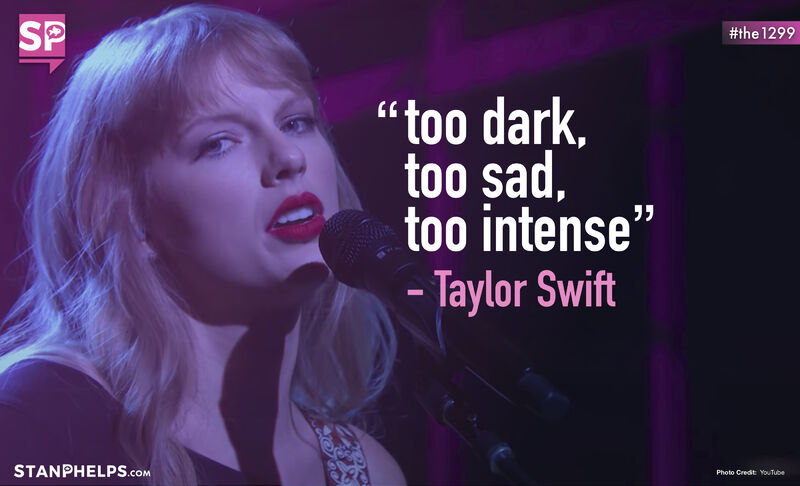 Taylor Swift described her song “All too well” as “too dark, too sad, too intense.” Swift performed the 10-minute (Taylor version) of the song this past weekend on SNL. It’s an instant classic.

The song was accompanied by a short film written and directed by Swift. “All too well” is a 10-minute ballad about a scarf and a failed relationship. Reading between the Thanksgiving, maple latte, and age references, it is about a short-lived relationship with actor Jake Gyllenhaal.

The original song and the new version are both examples of the Pink Goldfish of Lopsiding. Lopsiding is about being unbalanced, imperfect, and odd.

Unbalanced? Antonyms for unbalanced include: crazy, insane, and unsound. Those don’t sound like a recipe for success. But they are. Lopsiding is about amplifying, not reducing, potential flaws.

Flaws such as “that song is too dark” or “too long, no one will listen to a 10-minute song” or “those details are way too personal.”

Swift wrote the song while on the rebound at age 21. It was originally 10-minutes. A 21-year-old Taylor Swift couldn’t release it then. She shared with Jimmy Fallon, “Ten minutes is absurd.”

When someone tells you that you are doing “too” of something, perhaps it’s time to turn up the dial even more. In the words of Harvard Business School Professor Youngme Moon, “True differentiation is rarely a function of well-roundedness; it is typically a function of lopsidedness.”

Taylor’s fans (known as Swifties) are rabid. They crave the real stories of her life and relationships shared in her songs. Swift has never said the song is about Gyllenhaal, but she drops clues like bread crumbs in the original liner notes.

Swift shared with Rolling Stone on a podcast, “I truly can’t believe it now when I play it live and everybody in the crowd knows every word. That’s one of the most beautiful things about this album for me when I look back on it: Like, wow, I really didn’t pick that one.”

Takeaway: Sometimes too much of a good thing ends up being legendary.