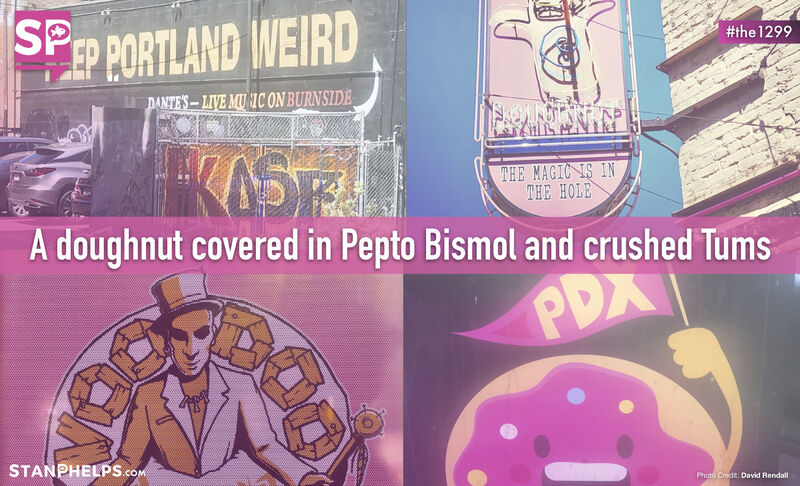 Kenneth “Cat Daddy” Pogson and Tres Shannon founded Voodoo Doughnut in Portland, Oregon, in 2003. David Rendall and I had a chance to visit last week as the Pink Goldfish 2.0 Book Launch Tour. Voodoo is one of our favorite examples of Antagonizing.

Back to the doughnuts. The founders chose “voodoo” because they liked the number of O’s in the word. This is obviously a very scientific approach to the branding process.

To set themselves apart from the standard doughnut shops of the world, the pair decided to create toppings in an entirely new way. Their maple doughnut is layered with two full strips of bacon.

Other doughnuts are covered in Cap’n Crunch or Fruit Loops cereal. “We reinvented the doughnut shop,” says Tres. “Everyone can say what they want, but no one was putting strips of bacon on a maple doughnut before us. No one was using cereal!”

Their signature doughnut is an edible voodoo doll. It’s a plain doughnut with a face and arms and is covered with chocolate frosting and white decorations. A pretzel stick is included and can be used to stab the doll, which is filled with red jelly.

During shop hours, the pair experimented with new ingredients that began to turn heads. “The Nyquil doughnut really built up the hype around us,” says Cat Daddy. “All of a sudden, we were on wacky morning radio talk shows all around the country. They talked about us on The Wire, Jay Leno mentioned us; it was madness especially for our first few months in business.”

A doughnut covered in Pepto Bismol and crushed Tums was next. But both of the drug-laced doughnuts have been removed from the menu. The Portland Health Department determined that it wasn’t safe for people to consume either one of these pharmaceutical pastries. Having your doughnut banned by a government agency definitely counts as a step toward antagonizing.

If that wasn’t enough, their Cock’N’Balls doughnut definitely antagonizes some visitors to their stores. We won’t describe it for you here, but you can find a complete description on their website.

Voodoo Doughnut is also unusual in two other small ways. They only accept cash payments, and their signature pink boxes are famous worldwide. Additionally, you can see the “Keep Portland Weird” sign from the front of Voodoo Doughnut. They are definitely doing their part to fulfill that goal.

Sometimes a Pink Goldfish is a Nyquil doughnut that is banned by the government.