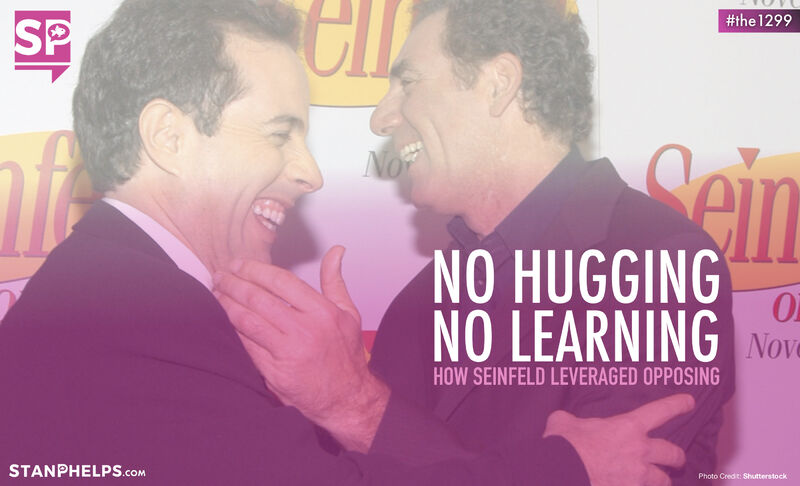 How did Seinfeld become the most successful TV sitcom of all time? They did it with a radical Pink Goldfish approach called Opposing. Creators Jerry Seinfeld and Larry David decided to do the opposite of the tried and true standard.

Instead of an embrace and a learning moment at the end of an episode, they instituted a “NO HUGGING, NO LEARNING” mantra as the rule. Not only would Jerry, Elaine, Kramer, and George not learn, they’d devolve and become worse human beings.

Do you have the courage to be an opposing brand?

The Seinfeld Chronicles almost never made it to air. NBC executive Brandon Tartikoff greenlit it for only four episodes. This was at a time that being given six episodes was considered a huge slap in the face. Tartikoff Infamously described it as too New York, too Jewish, “Who will want to see four Jews wandering around New York acting neurotic?”

To oppose is to be contradictory and dissimilar. It is simple. When everyone goes left, you go right. When everyone offers healthy options, you offer unhealthy ones. When everyone is open late, you close early. It’s maximum separation. It’s a complete break with convention. For Seinfeld, it meant no happy endings.

It’s worth taking a brief look at the definition of opposite. It means, “contrary or radically different in some respect common to both, as in nature, qualities, direction, result, or significance.”

This is important. To be opposites, two things need to be both very different and also have something in common. There’s something that unites them but something else that completely separates them.

So what? Why does this matter? It’s vital because everything doesn’t have to be different in order to be the opposite. In fact, if everything is different when you compare two things, they’re not opposites. They are unrelated. Seinfeld was still a half-hour sitcom on network television.

In other words, you don’t have to leave your industry to do the opposite of what everyone else in your industry does. That’s not doing the opposite. That’s just joining or creating a different industry.
Paradoxically, you have to maintain some similarities in order to be considered opposites.

In the spirit of “Not that there is anything wrong with that,” how are you doing the opposite of convention in some aspects of your business?

For me, I’m not a list-builder. I won’t ask for your email. This violates a cardinal rule as a speaker. I’ve heard this a thousand times, “YOU MUST ALWAYS BE BUILDING YOUR LIST.” Nope, not me.

I also rarely ever sell my books in the back of the room. I’d much rather give you a copy of my MiniBük or a free eBook. Instead of taking a credit card, I’d much rather talk to someone about the concepts and how they can be applied to their business.