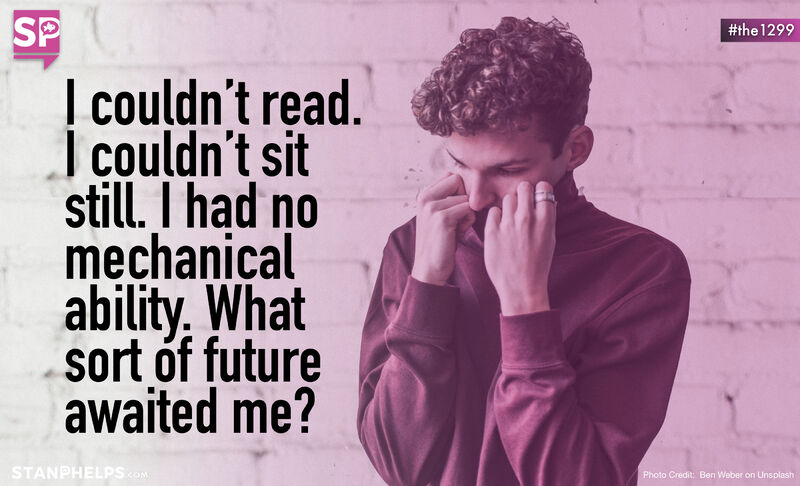 Paul grew up in a hard-working, middle-class family in Southern Cal. In second grade, he still didn’t know the alphabet. Efforts by his teachers, parents, and siblings didn’t seem to help. He was eventually diagnosed with both dyslexia and ADHD. After failing a few grades and being expelled from several schools, he finally graduated from high school with a 1.2 GPA and a ranking of 1,482 out of 1,500 students.

Based on his disability and poor performance in school, most people wouldn’t have predicted success for Paul. In fact, Paul himself was often concerned that he would end up homeless. He was fired from multiple jobs.

Paul asked himself, “I couldn’t read. I couldn’t sit still. I had no mechanical ability. What sort of future awaited me?”

He started a small business selling school supplies and copies in a store so small that he had to move the copier out to the sidewalk. Copies were four cents. Paul named the store after his nickname. Because of his curly, red hair, friends called him “Kinko.”

The business eventually grew to 1,200 locations in 10 countries and, in 2004, Paul Orfalea sold Kinko’s to FedEx for more than $2 billion.

How did a dyslexic guy who can’t read or write build such a successful business?

In Pink Goldfish 2.0, David Rendall and I share how Orfalea succeeded because of his disability, not in spite of it. Because of his weaknesses, he had to trust others and rely on them to help him run the business. For example, he needed people to assist him with correspondence. This evolved into a culture of teamwork and collaboration that separated Kinko’s from their competitors.

Because he was restless, he spent most of his time out of his office and in the stores, observing the practices of frontline employees. Because he was impulsive, he quickly implemented new ideas throughout the organization.

Orfalea wrote “Copy This! Lessons from a Hyperactive Dyslexic Who Turned a Bright Idea into One of America’s Best Companies” with journalist Ann Marsh. In it, he credits his disabilities for his success and says he thinks everyone should have dyslexia and ADHD. During speaking engagements, he advises audiences to “like yourself, not despite your flaws and so-called deficits, but because of them.”

Paul Orfalea didn’t just appreciate his own weaknesses; he also created an organization that appreciated the weaknesses of its employees. He turned Kinko’s into a Pink Goldfish by demonstrating sensitivity for the limitations of others, such as stubbornness, impatience, disorganization, and impulsiveness.

Paul wasn’t afraid to be different, and he encouraged his employees to approach their work in unique and creative ways. This created a culture of innovation, trust, and teamwork that made Kinko’s a perennial favorite on Fortune’s 100 Best Companies to Work For.

Takeaway – Courtesy of actor Peter Dinklage, “Once you’ve accepted your flaws, no one can use them against you.”