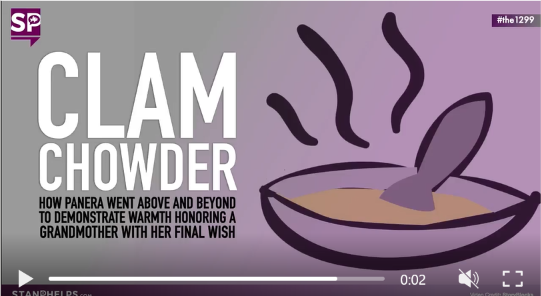 Ten years ago Brandon Cook was visiting his grandmother in the hospital. The prognosis was dire…

Brandon’s grandmother had pancreatic cancer and was down to her last few days.

One of the horrible side effects of pancreatic cancer is that you get to the point where you can no longer eat. Brandon was watching his grandmother suffer, and he was pleading with her to eat something.

“I’d like to have some soup.” She then qualified her request.

“But not the shit they serve at the hospital!”

She wanted a bread bowl of clam chowder.

Where do you get a bread bowl of clam chowder? You get it at Panera Bread. But here was the problem. Due to demand, Panera only serves clam chowder on Fridays during the summer.

This was a Monday. Oop.

Brandon wasn’t going to let that get in the way. He picked up his phone and called the closest Panera in Nashua, NH. Within a minute, he was speaking to Sue Fortier, the manager.

Brandon explained the situation and his grandmother’s wishes. Upon hearing the story, Sue stopped Brandon and told him to come over. They would be happy to help him and his grandmother. Brandon drove the 10 minutes to Panera and met Sue and her team.

Sue gave Brandon a couple bread bowls of clam chowder. As a little extra, the team also threw in a small box of cookies.

Brandon returned to the hospital and had a wonderful lunch with his grandmother. For a short time, it sustained her and made her happy.

Driving home that afternoon, Brandon reflected on this small act of kindness by Panera. He decided he was going to do something about it.

Sidebar: How do we know Brandon Cook was a good kid?

Well, he must have been as he took the time to visit his grandmother. He was also thoughtful because he fulfilled her clam chowder request.

How do we know for sure? We can be 100 percent sure because Brandon was friends with his mom on Facebook.

Brandon wrote about his experience on the social networking site.

Brandon’s mom, Gail, saw the post and was extremely moved. She copied it and placed it on Panera’s Facebook page.

That’s when something amazing happened. In less than four weeks, a single Facebook post by Brandon Cook had garnered more than 800,000 likes, 34,000+ comments, and scores of national media.

Because Panera empowered its employees to demonstrate warmth and competence by doing the little extra. A concept I call a Purple Goldfish.

The idea of warmth and competence is not just theory. It draws from original research spanning multiple studies. Companies need to find ways to leverage individual customer and employee relationships by doing a tangible extra.

Actions speak louder than words. Because your brand is no longer what you tell people it is. It’s what your customers (like Brandon) experience, it’s how they feel, and most importantly, it’s what they tell others about their experience.