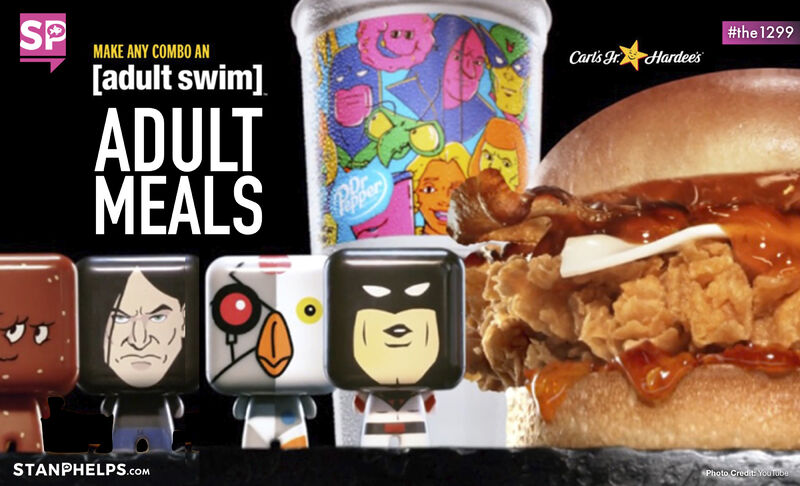 Hardees Restaurants partners with the Cartoon Network‘s [Adult Swim] this Fall to offer Adult Meals. It’s a partnership of two differentiated brands 20 years in the making.

Let’s explore each starting with Adult Swim. It is the adult programming at night on the Cartoon Network. Adult Swim was born out of a unique combination of insights.

1. Ad buyers did not want to buy any ads on the network after 10 p.m. They reasoned that kids were already in bed.

2. At any given time, one out of every three people watching Cartoon Network are adults. Adults who weren’t parents.

In September 2001, the adult programming block was born. It ran two nights a week and was produced practically on zero budget. It needed a name. The creative team considered Aviso, Parental Block, and Insert Quarter before diving all-in with Adult Swim.

Back to Hardee’s and Carl’s Jr. In 2001, the franchise was struggling. New President and CEO Andrew F. Puzder needed something new. He also had a couple of insights:

1. Hardees Restaurants had become in his words, “a jack of all trades and master of none.”

2. In the early 2000s, the industry was in flux. Other fast-food companies were furiously adding healthy options to their menu as a result of the Morgan Spurlock documentary “Supersize Me.” Fast food outlets were now offering water, fruit, yogurt, and salads.

Did they try to get healthier? Nope. Hardee’s and Carl’s Jr. came up with Thickburgers.

What is a Thickburger? It is a very large hamburger (up to 2/3 pounds) with generous amounts of other toppings. The All-American Thickburger is topped with a full hot dog and potato chips as well as lettuce, tomato, mayo, ketchup, onions, and pickles. The Philly Cheesesteak Thickburger piles an already unhealthy sandwich on top of an unhealthy hamburger to form a monster that contains enough calories to fuel the average person for about a week.

In Pink Goldfish 2.0, David Rendall and I share how Hardees Restaurants moved in the opposite direction. They took fast food, which was already tremendously unhealthy, and they lopsided it to make it even unhealthier with the Thickburger. They took fatty foods and made them fattier. They took nasty food and made it nastier.

Cartoons aren’t just for children. Neither are free toys with your fast food meals. Hardee’s and Carl’s Jr. will be including toys for adults in some of their meals this Fall. There is a catch. To get one of those cool [Adult Swim] character toys, it’ll cost you an extra dollar.

Anyone else up for a Hot Honey Hand-Breaded Chicken Sandwich with a Space Ghost figurine on the side?