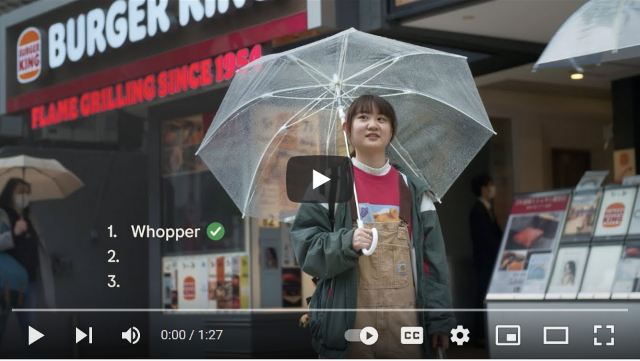 A Whopper of a commercial. Burger King just launched a global campaign based on an apparent weakness.

Research found that 6 out of 7 people couldn’t name more than one burger on Burger King’s menu. For a global brand . . . that’s borderline pathetic.

Bjorn Stahl, chief creative officer of the Swedish agency INGO behind the project sees lemonade. He shared with Adweek,

“I think it shows how amazingly strong the Whopper is as a product and brand. We decided to look at the study as the glass is half full.”

The 90-second spot (below) lopsides how folks in Tokyo, London, Stockholm, and Mexico are befuddled with the question.

INGO is also the creative genius behind “The Moldy Whopper” and “Not Big Mac” campaign.

The Moldy Whopper speaks for itself. A timelapse that shows how Burger King doesn’t use preservatives on its burger. Did it work?

The Moldy Whopper campaign drove sales up 14% and boosted awareness of the removal of artificial preservatives by more than 400%. It also resulted in at least 8.4 billion impressions and gave the brand $40 Million in earned media.

The “Not Big Mac” was the result of McDonald’s losing a legal battle. The arches lost the trademark on the words “Big Mac.” Enter INGO. They launched a new line of burgers called “Not Big Macs” for a limited time at locations in Sweden.

The burgers were regular BK burgers with temporary name changes. The items included:

Big thanks to Kirby Hasseman and Bill Petrie for the heads up on the naming campaign.