Bringing employees together has the biggest impact on culture 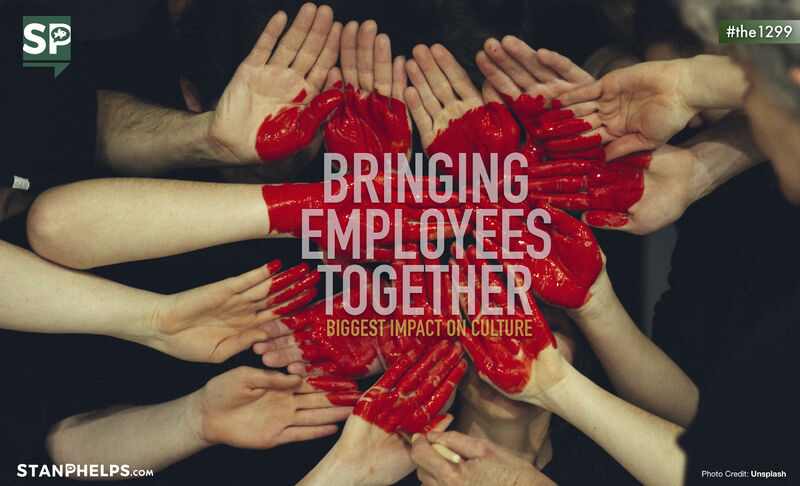 Employee benefits with the biggest impact on culture seem to be those that bring employees together.

In “Green Goldfish 2.0” Lauren McGhee and I featured the case study of Assurance. The Illinois-based insurance brokerage has a whole host of incentives for its employees, including Starbucks coffee and yoga classes. Plus big-ticket items such as referral bonuses for new clients, education reimbursements, and companywide bonuses for reaching goals.

Yet, they’ve learned all benefits aren’t created equal. “I think we’re really thoughtful about the things we emphasize,” says Jackie Gould, the company’s COO. “A lot of [the benefits] aren’t really about the money. It’s more about fostering the relationships.”

Relationships flourish when people come together around a common goal or purpose.

According to Steven Handmaker, former CMO at Assurance (now CMO at its parent Marsh McLennan), culture is the secret sauce for engagement. Each year the company rallies around a specific theme and an accompanying song.

The songs are typically from the 1980s with a fun/irreverent feel. In 2017, it was the “Power of Love” by Huey Lewis. The previous year was Salt-N-Pepa’s “Push It,” and the theme was wellness.

Assurance’s “Shared Success” bonus program is based on four components, two of which are financial and two that tie in with the cultural theme. For example, during the wellness year, everyone in the company would achieve success if 84% of the company completed a 5K race at some point during the year. Over 95% ended up completing a race.

[HOLD MY BEER: Anheuser-Busch InBev has instituted a shared success goal with regard to COVID-19 vaccinations. The company plans to give every American a free beer if 70% of Americans are vaccinated with at least one shot by the Fourth of July. Do we have a shot at this? Unfortunately, it doesn’t look good given current vaccination rates. I don’t have high hopes. But, that’s not the case if you live in the State of Washington. They just announced they are giving away a joint for a jab. I can hear Austin Powers in my ear, “A poke and a toke”]

Back to Assurance. In 2017, the goal was 37 handwritten notes. Twenty were meant for customers and 17 for friends/family. They also achieved that shared goal.

Not bad for a “boring” insurance brokerage.