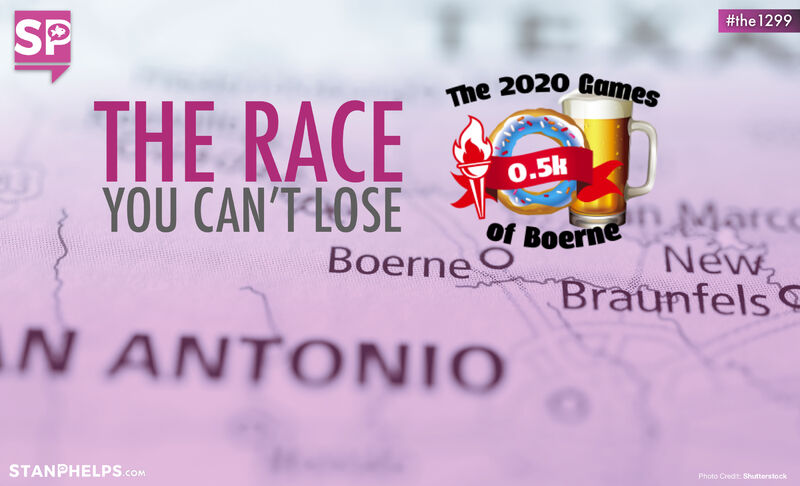 If you want to raise money for a great nonprofit cause, you should probably avoid the traditional 5k race. There are so many of those, you’ll struggle to get anyone’s attention, which means that you won’t get a lot of participants and you won’t raise very much money.

Last week, David Rendall and I visited Boerne, Texas on the Pink Goldfish 2.0 Book Launch Tour. Boerne (pronounced Bernie) is a small town with a population of fewer than 20,000 people outside of San Antonio.

They wanted to raise money for Blessings in a Backpack, a nonprofit that provides a backpack full of food for kids to take home from school to get them through the weekend.

Instead of the ubiquitous five-kilometer race, they invited people to participate in a .5k run. America is not on the metric system, so we’ll translate. Half a kilometer is .31 miles or 546 yards or 1,638 feet. Even at a slow walking pace, you could finish the distance in less than eight minutes. Some have called it “America’s Laziest Race.” Others claim it is “The World’s Shortest Road Race.”

One of their goals is to be a safe haven for all the underachievers who don’t want to wake up early on the weekend to workout or finish a race. And you don’t have to wake up early for the Boerne .5k. It starts at 11 am. They know their audience. You can sleep in and still get to the race on time.

When you arrive at the race, you’ll receive a pre-race beer. Don’t worry, if you finish your beer in the few minutes that you’re doing the race, they also provide a post-race beer.

But what about your needs during the race? What if you get tired or thirsty or hungry along the way? Are there aid stations on the course? Yes. There is an aid station at the halfway point, where you can get coffee and donuts. It also includes a smoking section, just in case it’s been too long since your last cigarette and you can’t wait another four minutes until the end of the race.

When you cross the finish line, just moments after you crossed the start line, you’ll get a finisher medal, race T-shirt, and a .5k race sticker for your car, so you can let all the other drivers know about your athletic prowess.

But maybe you don’t have what it takes to go the full distance. Maybe you haven’t trained enough. Maybe you didn’t sleep well. Maybe you just don’t like to move at all. That’s okay. You can be a VIP. Pay double the entry fee and you can get a ride in a vintage Volkswagen bus to the finish line. No running or walking is required. VIPs still get a medal, shirt, and sticker, even though they didn’t exert any energy.
This is ridiculous. This is outrageous.

So does it work? It does. The race is so popular that they sold out all 225 spots in their first year and raised over $20,000 for charity. The 2019 race sold out in only 37 minutes. During the pandemic, they pivoted and went virtual with 1,500 registrants.

Sometimes a Pink Goldfish is a race you can’t lose.