Adidas teams up with Waffle House for sweet-looking golf shoes 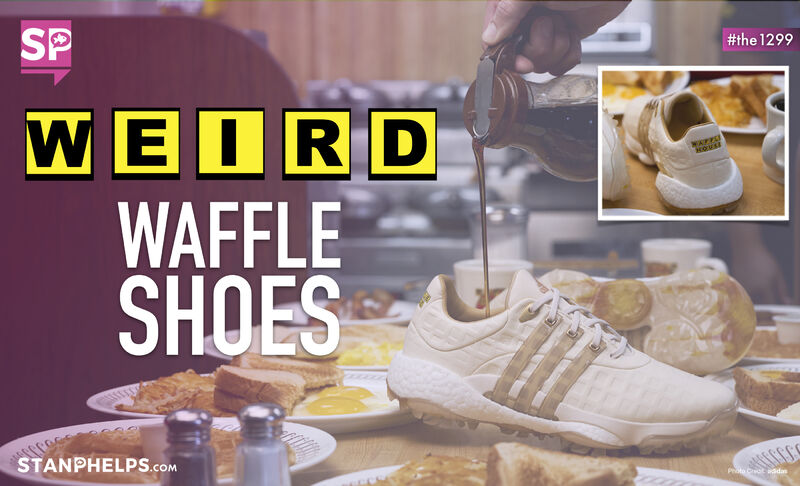 adidas teams up with a Georgia icon this week. The result: a masterfully sweet-looking golf shoe.

Move over Augusta National… enter the TOUR360 22 x Waffle House – truly a golf shoe unlike any other. A shoe that would make Nike‘s co-founder, the late Bill Bowerman, proud.

The Oregonian / OregonLive.com shared a quote from Barbara Bowerman. Barbara told a Nike historian that she and Bill were contemplating how to handle the new artificial surface on the track,

“We were making the waffles that morning and talking about (the track). As one of the waffles came out, he said, ‘You know, by turning it upside down — where the waffle part would come in contact with the track — I think that might work… So he got up from the table and went tearing into his lab and got two cans of whatever it is you pour together to make the urethane, and poured them into the waffle iron.”

This type of ingenuity was similar to that of Adolf (nicknamed Adi) Dassler. He began making athletic shoes in the family washroom back in the 1920s.

In the 1930s, Adi had a huge break. He wordlessly presented a young American with a pair of spikes at the Berlin Olympics.

Jesse Owens wore the distinctive dark shoes with two leather strips on the sides. He would shock the world and win four gold medals.

Wait, two stripes? Yes, two. Those two leather stripes were integrated with the laces. They functionally helped keep your foot in the shoe. Years later Adi and his older brother Rudy would find that two strips weren’t enough… and added a third.

Back to the golf shoes. Global footwear director for adidas Golf Masun Denison shared the reasoning behind the weird partnership,

“We love this time of year because more than anything else it’s an unofficial start to the golf season for everyone. Waffle House is such a well-known restaurant in Georgia and throughout the U.S., we knew it would be fun to partner with their team on a design that brings a piece of the famous restaurant to everyone, all in our flagship silhouette (shoe).”

Kudos to my brother-in-law Micky Baehr for sharing the story with me. The Mick-ster knows I both worked for the brand with three stripes for 8 years and I’m borderline golf obsessed.

I’m guessing that Walt Ehmer might also share my love for the game. The Waffle House, Inc. CEO gushed, “Who knew our famous, sweet cream waffles could also be so much fun to wear?”

adidas began taking orders yesterday (April 7th) for the limited-edition cobranded shoes. Even the shoebox is a little microweird. It is designed to look like a Waffle House.

For background, Waffle House began in 1955 when Joe Rogers Sr. and Tom Forkner decided to open a 24-hour, sit-down restaurant in Georgia. Today, there are 1900 restaurants in 25 states. All of which lopside their hours. They are open 24/7/365.