A tale of two Bakers and a pink triangle 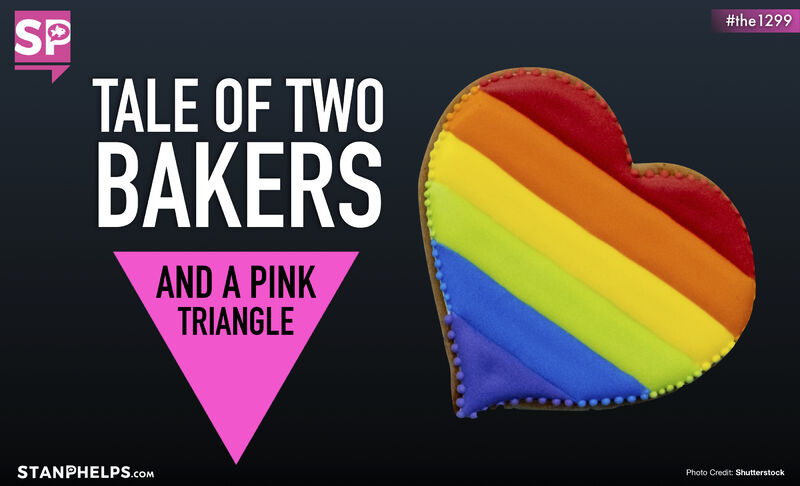 A tale of two Bakers and a pink triangle. Those Bakers are Gilbert Baker and the Confections Bakery in East Texas.

Let’s start with the pink triangle. The pink “pointing down” triangle was a Nazi symbol. The Germans used it during World War II to identify and stigmatize homosexuals. It was meant to be a badge of shame. In the 1970s, the pink triangle was revived in an effort of Opposing. It was reclaimed as a symbol of protest against homophobia. It soon became a popular symbol of LGBTQ pride.

Enter Gilbert Baker. In 1978, Baker was challenged by politician and activist Harvey Milk to create a new symbol. Gilbert designed a flag with eight colored stripes.

Each color had a meaning:

The flag first flew in June of 1978 at the pride parade. Months later Harvey Milk was assassinated and the flag was cemented as the new symbol of LGBTQ pride.

What happened to the hot pink? Pink was dropped because the fabric was hard to source.

A year later, turquoise would also hit the cutting room floor. The organizers of the 1979 San Fran parade decided to split the flag into two in order to decorate each side of the route. This required an even number of stripes. Hence a six stripe version of the flag that is still the standard today — red, orange, yellow, green, blue, and violet.

That brings us to the second baker and a batch of heart-shaped, rainbow-iced cookies in honor of Pride Month.

The owners of Confections Bakery have received significant backlash after posting a photo of the cookies they were selling. The bakery lost Facebook followers and the cancellations started to roll in.

The two sisters (Dawn and Miranda) posted on Facebook:

“Today has been hard. Really hard.
We lost a significant amount of followers because of a rainbow heart cookie we posted.
We received a very hateful message on our business page canceling a large order (5 dozen) of summer-themed cookies for tomorrow morning (that we just finished decorating) because of a rainbow heart cookie we posted.
My heart is heavy. Honestly, I never thought a post that literally said more love less hate would result in this kind of backlash to a very small business that is struggling to stay afloat and spread a little cheer through baked goods.
So. If you love our cookies we will have an overabundance of them tomorrow. Hopefully, tomorrow will be better.”

And was it better the next day? Yes, lines formed around the block the following day. Confections had to close an hour early because they were sold out.

The sisters are appreciative and they are doing their best to keep up with the demand.

Not afraid of Antagonizing some . . .they are also still baking the rainbow cookie.