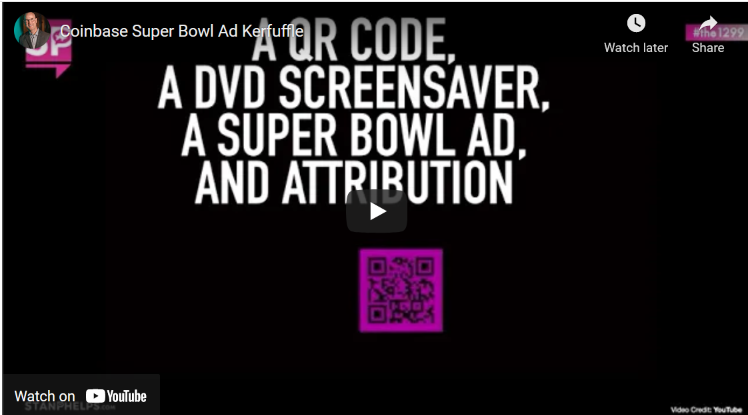 A QR Code and a pong-like DVD screensaver bounce their way into a Super Bowl Ad.

The commercial from Coinbase created buzz and now some beef.

In response to the buzz, CEO Brian Amstrong took to Twitter on Sunday to share how the ad came about. What resulted was a 12-tweet thread. Here is the unabridged version:

“Some folks asked for details of how our super bowl ad came to be, here is the quick back story…

– we bought it not knowing what we would do

– I didn’t like any of them (standard super bowl ads tend to be gimmicky, celebrity cameo driven, going for a laugh etc)

– side note: it never made sense to me why I should like a product because a famous person got paid to say they like it

– so we went back and brainstormed, came up with a bunch of wild ideas (some of these we will do down the road, but didn’t have enough time to produce – think Apple 1984, some crypto native stuff, etc)

– we were running short of time (a few weeks), and one of the original ideas we had included putting a QR code at the end

– this was partially inspired by Reddit, Inc.’s superb owl commercial at previous super bowl, key insight was if you can only flash something on screen for a moment people will google it later – how do we get them from TV to phone to convert

– team came up with the DVD screensaver theme, and commissioned a cool song from Com Truise (whose music I like)

– submitted the ad for approval and got a lot of pushback on whether we could run it at all, i won’t get into details here but it required some special meetings, indemnity etc

– they finally agreed and it turned out great – our team did an amazing job pulling this off last minute (and of course the production budget was tiny, less then $100k)

– I guess if there is a lesson here it is that constraints breed creativity, and that as founders you can empower your team to break the rules on marketing because you’re not trying to impress your peers at Adweek or wherever. No ad agency would have done this ad.

– I’m still new to marketing, but “Do things that you think are funny or awesome even if people tell you it won’t work” seems like reasonable advice so far.

– Although we didn’t work with a traditional ad agency I’d be remiss not to mention the creative firm we worked with who actually created the ad, commissioned the song, got the clearances etc etc. Honestly, felt like we were all one team so I didn’t fully realize it, thank you!”

Now, let’s talk about the beef. In response to the tweets, Kristen Cavallo, CEO of The Martin Agency called out Armstrong,

“It was actually inspired by presentations our agency showed your team on 8/18 (pages 19-24) and 10/7 (pages 11-18) with ad concepts for the Super Bowl with floating QR codes on a blank screen.”