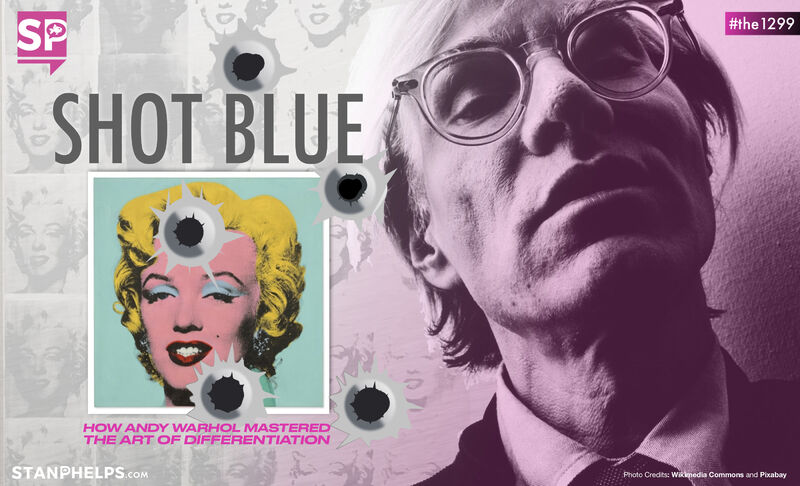 A flawed painting of Marilyn Monroe by Andy Warhol may auction for $200 million in May.

The late performance artist Dorothy Podber was visiting “The Factory” in 1964. While in Warhol’s art studio, she asked Andy if she could shoot some of his paintings. Warhol assumed she was referring to a camera and consented.

Podber then put on a pair of black gloves and pulled a small pistol out of her purse. She blasted a nearby stack of Monroe silkscreen paintings. According to Warhol’s friend and photographer Billy Name, she struck “Marilyn right between the eyes.”

These four paintings were marred by a bullet hole. Only the turquoise one in the Series was spared. It sold for $80 million back in 2007. It turns out the flawed ones (even though Warhol tried to cover up the bullet holes) are more awesome.  It has been estimated that the financier Kenneth Griffin bought the Shot Orange Marilyn for $250 million.

“Shot Sage Blue Marilyn” is being offered for auction by the Thomas and Doris Ammann Foundation. The charity will use the proceeds of the sale to fund health and education programs for children worldwide.

What can we learn from the late Andy Warhol about differentiation?

Warhol was a masterful prolific artist. Netflix currently has a great limited series documentary on the artist called, “THE Andy Warhol DIARIES.”

Andy understood the importance of standing out. One strategy he used was lopsiding. Take an approach that made him unique and then triple down on it.

In 1961, the relatively unknown Warhol believed he was about to break through. He had created a batch of paintings inspired by comic books. The problem was that Roy Lichtenstein beat him to the punch. Andy needed a new idea. The interior designer Muriel Latow recommended that he make paintings of money. That idea cost Warhol 50 bucks.

Latow then tossed in a second idea for lagniappe. It was one word… Campbell’s. A year later Warhol did an entire exhibit of 32 Campbell’s soup can paintings in Los Angeles. Pop art was born.

Using the technique of silkscreening, it is estimated that the artist from Pittsburgh (with the help of assistants) created over 85,000 works during his life.

So, how is it that these Warhol Marilyn’s are so coveted?

It turns out that Warhol swerved from his normal mass production process for these 1964 portraits. Andy developed a more refined and time-intensive process for creating these works. This technique turned out to be so difficult that the artist soon abandoned it.

Warhol realized he was a brand. He stood out by being flawsome. In the words of restauranteur Mr. Chow, “The master hide’s one’s weakness. The Grand Master uses his weakness. He (Warhol) is a grand master. Bad skin… bad hair, he uses all of his weaknesses.”